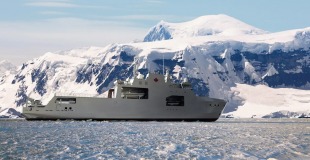 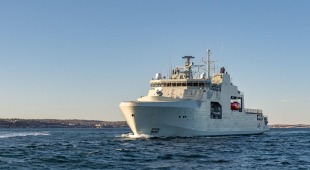 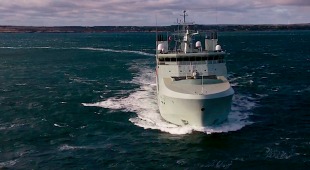 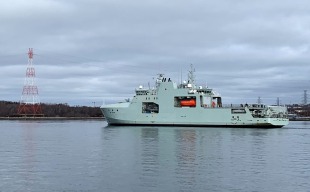 The vessels' design was initially intended to incorporate a conventional icebreaking bow for cruising, and would have proceeded backwards for breaking heavy ice. The vessels' stern would have been designed for ice breaking and they would have employed azimuth thrusters for propulsion and for chewing through resistant ice. However, due to cost constraints, a conventional bow-first design was chosen for both light and heavy icebreaking. The propulsion would be provided by diesel-electric twin shafts with bolt-on propellers, similar to existing Canadian Coast Guard icebreakers. The vessels' ice class is Polar Class 5, but the bow region is further strengthened to higher Polar Class 4 level.

The vessels will have a hangar and flight deck capable of employing and maintaining the same maritime helicopters as the RCN's other vessels: the CH-148 Cyclone and the CH-149 Cormorant.

The ships are designed to displace 6,440 metric tons. They are capable of outfitting multiple payload options such as shipping containers, underwater survey equipment, or a landing craft. The vessels have a 20 tonne crane to self-load/unload, and a vehicle bay to carry vehicles for deployment over the ice. The design also calls for an enclosed cable deck and forecastle to better cope with the Arctic environment. On the open sea, the ship has fin stabilizers to reduce roll that are retractable during ice operations.

In August 2015, it was announced that BAE Systems had won the contract to provide up to six modified Mk 38 Mod 2 25 mm cannon for the naval ships in the class (coast guard order will be unarmed). This contract also covers the service life of the weapons.

In September 2015, it was announced that the ships would be outfitted with SAGEM BlueNaute navigational systems. On 7 October 2015, Thales IFF system was selected for use on the class. Terma currently provides its SCANTER 6002 radar system to Lockheed Martin Canada as part of the Combat Management System (CMS 330), which was selected by Irving Shipbuilding Inc. for the Arctic and Offshore Patrol Ships (AOPS).

On 22 May 2019 the official announcement was made to begin process of building two vessels for the Canadian Coast Guard. The Canadian Coast Guard version will be built to a slightly modified design. Modifications include a new bridge layout and accommodations for a non-military crew subject to Transport Canada requirements. Some areas are to be changed to meet the needs of coast guard equipment and there will be modifications to the deck.