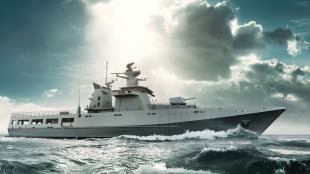 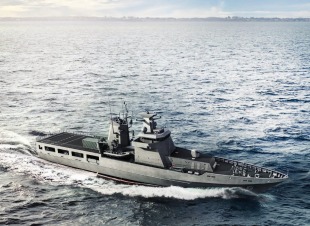 The Arafura class is a multipurpose small warship class for the Royal Australian Navy. The OPV project would replace 26 vessels across four separate ship classes: the Armidale-class patrol boats, the Huon-class minehunters, the Leeuwin-class survey vessels, and the Paluma-class survey motor launches. Although having a common design (which could be up to 2,000 tonnes in displacement), the ships would use a modular mission payload system to fulfill specific roles; primarily border patrol, mine warfare, and hydrographic survey.

Instead of being capable of performing all roles simultaneously, the ships will have a modular mission payload system like the Standard Flex system used by the Danish Navy, or the system used by the United States Navy's littoral combat ships: mission-specific equipment will be fitted to containerised modules, which can be exchanged for different modules when the ship needs to change roles. The use of containerised modules means that equipment can be upgraded without taking the ships out of service for refit, and if necessary can be fitted to requisitioned civilian vessels.

The new ships were be used for offshore and littoral patrol, border protection, anti-terrorism and anti-piracy operations, mine warfare, and hydrographic survey. It was plausible that the OPVs will operate in support of the Canberra-class landing helicopter dock ships; amphibious operations would benefit from the survey and mine warfare capabilities of the ships.

The twenty vessels originally planned to be built was reduced was later reduced to 12 following the change in their planned role. The project received the procurement designation SEA 1180. On 24 November 2017, the government announced that ship designer Lürssen had been selected.

In October 2017, the Australian government announced that the vessels would use an Australian-designed SAAB tactical combat management system.

The class of ships will be based on Lürssen's OPV80, similar to the Darussalam-class offshore patrol vessel of the Royal Brunei Navy. The first two vessels will be built at ASC shipyards in Adelaide, South Australia before production is transferred to Civmec shipyards in Henderson, Western Australia.

Construction of the first ship began on 15 November 2018. On that day, it was also announced that the vessel would be named HMAS Arafura, and the class the Arafura-class patrol vessels.

On the 9 April 2020, the second ship in the class, HMAS Eyre was laid down at ASC's shipyard. Announced at the time was the names of the following four ships: HMA Ships Pilbara, Gippsland, Illawara and Carpentaria.