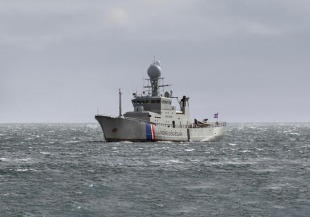 The Ægir-class offshore patrol vessel is a class of two offshore patrol vessels serving in the Icelandic Coast Guard (ICG). They participated in the two latter Cod Wars. The vessels conduct patrols, search and rescue, fishery inspections, general law enforcement and counter-terrorism operations in the Icelandic exclusive economic zone and the waters of the surrounding territories, such as Greenland and Jan Mayen.

The concept for the Ægir-class OPV was based on the Icelandic Coast Guard experiences with ICGV Þór and ICGV Óðinn. Rear Admiral Pétur Sigurðsson, commander of the ICG, set forth a requirement for a ship larger than both Þór and Óðinn and more seaworthy. The vessels were also armoured for icebreaking.