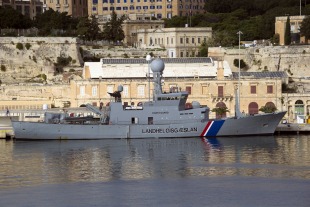 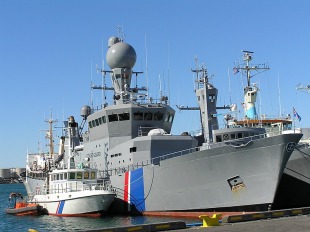 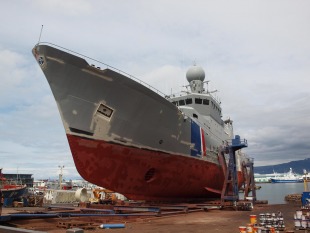 ICGV Týr is an Ægir-class offshore patrol vessel and the flagship of the Icelandic Coast Guard. The ship was built by Dannebrog Værft in Denmark in 1974–1975 and entered service in 1975. Týr is the second largest ship in the Icelandic Coast Guard and participated in the Third Cod War. The ship conducts patrols, search and rescue, fishery inspections, general law enforcement and counter-terrorism operations in the Icelandic exclusive economic zone and the waters of the surrounding territories, such as Greenland and Jan Mayen.

The Ægir class was initially armed with a 57 mm (2.2 in) Hotchkiss cannon. However, these weapons were replaced in 1990 with the Bofors 40 mm (1.6 in)/L60 autocannon, which in turn was replaced with the 40 mm Bofors L70 in the late 2000s. Other weapons include net cutters, which the Icelandic Coast Guard (ICG) used during the Cod Wars. A large crane is situated forward of the helicopter deck. The ships of the class are equipped with Sperry surface search and navigational radar. Týr is equipped with hull-mounted sonar. The ship sports a helicopter deck aft and a hangar located between the funnels. In 1997, the helicopter deck was extended. The ship has a complement of 19.

The patrol vessel was ordered for construction by Dannebrog Værft of Denmark and launched on 10 October 1974. The vessel, named for the deity of Norse mythology, was commissioned in the ICG on 15 March 1975. Týr primarily conducts patrols, search and rescue, fishery inspections, general law enforcement and counter-terrorism operations in the Icelandic exclusive economic zone (EEZ).

In January 1980, the third engineer on Týr, stabbed and killed two of his crewmates before throwing himself overboard when the ship was located 50 nautical miles (93 km; 58 mi) miles northeast of Grímsey.

The Icelandic Coast Guard fleet takes part in Frontex operations. In December 2014 Týr played a major part in the rescue of 408 migrants 165 nautical miles (306 km; 190 mi) off the coast of Malta in a drifting cargo vessel. of 359 Syrian refugees were rescued in the eastern Mediterranean Sea in January 2015 after they had been abandoned by the crew of the cargo ship Ezadeen off the Italian coast. On 4 April, the crew of Týr rescued 320 people from a boat of the coast of Libya. During the days of 3 and 4 May, the crew rescued 328 people from two small boats north of Libya.

Týr finished its last tour of duty on 15 November 2021 and was put up for a sale.