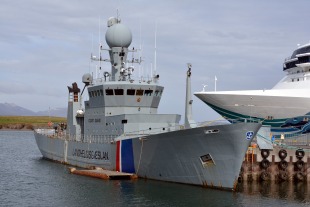 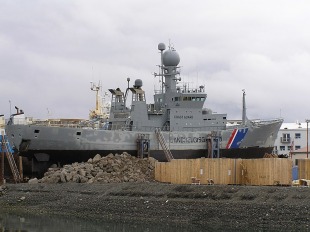 ICGV Ægir is an offshore patrol vessel of the Icelandic Coast Guard built by Aalborg Værft, in Denmark. She is the lead ship of the Ægir class and has one sister ship of an improved design, ICGV Týr. The ship entered service in 1968 and participated in the two last Cod Wars against the United Kingdom. Ægir primarily conducts patrols, search and rescue, fishery inspections, general law enforcement and counter-terrorism operations in the Icelandic exclusive economic zone. In 2020, the patrol vessel was taken out of service with its fate to be decided.

The Ægir-class ships were initially armed with a 57 mm (2.2 in) Hotchkiss cannon. However, these weapons were replaced in 1990 with the Bofors 40 mm (1.6 in)/L60 autocannon, which in turn was replaced with the 40 mm Bofors L70 in the late 2000s.[citation needed] Among other weapons equipped include net cutters, which the Icelandic Coast Guard used during the Cod Wars. A large crane is situated forward of the helicopter deck. Ægir mounts Sperry surface search and navigational radar. The vessel sports a helicopter deck aft and a hangar located between the funnels. In 1997, the helicopter deck was extended. The ship has a complement of 19.

The order of a new vessel to be constructed for the Icelandic Coast Guard (ICG) was projected in February 1965. The keel for the ship was laid down in May 1967 by Aalborg Værft in Denmark and the ship was launched that same year. Named for a character in Norse mythology, the ship was completed in 1968 and entered service with the ICG the same year. Ægir primarily conducts patrols, search and rescue, fishery inspections, general law enforcement and counter-terrorism operations in the Icelandic exclusive economic zone (EEZ).

On 1 November 2020, the Icelandic Central Public Procurement agency Ríkiskaup announced that Ægir will be auctioned because of its age and prolonged inactivity in the recent years. Ríkiskaup opened an online platform that allowed people to submit suggestions about the future of the vessel and the deadline was set for 6 January 2021.