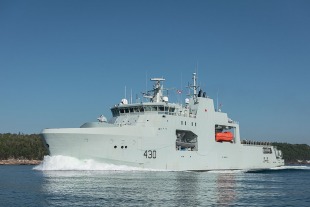 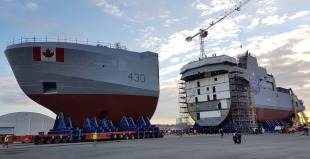 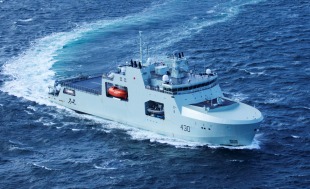 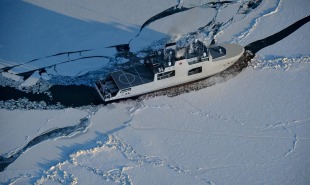 HMCS Harry DeWolf (AOPV 430) is the lead ship of its class of offshore patrol vessels for the Royal Canadian Navy. The class was derived from the Arctic Offshore Patrol Ship project as part of the National Shipbuilding Procurement Strategy and is primarily designed for the patrol and support of Canada's Arctic regions. The vessel was ordered in 2011, laid down in 2016 and launched in 2018. The vessel is currently finishing construction.

The Arctic Offshore Patrol Ship are designed for use in the Arctic regions of Canada for patrol and support within Canada's exclusive economic zone. The vessel is 103.6 m (339 ft 11 in) long overall with a beam of 19.0 m (62 ft 4 in). The ship has a displacement of 6,615 metric tons (6,511 long tons; 7,292 short tons). The ship has an enclosed foredeck that protects machinery and work spaces from Arctic climates. The vessel is powered by a diesel-electric system composed of four 3.6-megawatt (4,800 hp) generators and two diesel engines rated at 4.5 megawatts (6,000 hp) driving two shafts. Harry DeWolf is capable of 17 knots (31 km/h; 20 mph) in open water and 3 knots (5.6 km/h; 3.5 mph) while icebreaking in new year ice of 1 metre (3 ft 3 in) thickness. The ship is also equipped with a bow thruster to aid during manoeuvres and docking procedures without requiring tugboat assistance. The ship has a range of 6,800 nautical miles (12,600 km; 7,800 mi) and an endurance of 85. Harry DeWolf is equipped with fin stabilizers to decrease roll in open water but can be retracted during icebreaking.

Harry DeWolf is able to deploy with multiple payloads, including shipping containers, underwater survey equipment or landing craft. Payload operations are aided by a 20 metric ton crane for loading and unloading. The ship is equipped with a vehicle bay which can hold can pickup trucks, all-terrain vehicles and snowmobiles. The ship also has two 8.5 metre (27 ft 11 in) multi-role rescue boats capable of over 35 knots (65 km/h; 40 mph). The ship is armed with one BAE Mk 38 25 mm (0.98 in) gun and two M2 Browning machine guns. The patrol ship has an onboard hangar and flight deck for helicopters up to the size of a Sikorsky CH-148 Cyclone. Harry DeWolf has a complement of 65 and accommodation for 85.