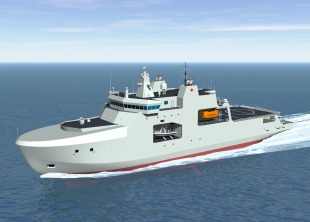 Robert Hampton Gray (AOPV 435) will be the sixth Harry DeWolf-class offshore patrol vessel for the Royal Canadian Navy. The class was derived from the Arctic Offshore Patrol Ship project as part of the National Shipbuilding Procurement and is primarily designed for the patrol and support of Canada's Arctic regions. It is expected to be the last naval AOPV to be built and will be followed by two more non armed vessels for Canadian Coast Guard.