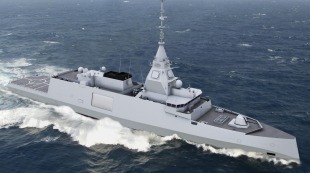 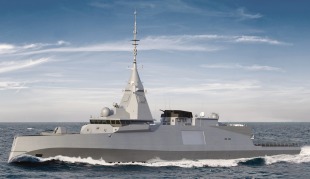 Defence and Intervention Frigate or FDI, also known as the Frégate de Taille Intermédiaire (English: Medium-Size Frigate) or FTI, is a planned class of French frigates. As of February 2022, five ships have been ordered for the French Navy, with the lead ship being named «Amiral Ronarc'h», and an additional three for the Hellenic Navy.

First steel was cut in October 2019, beginning construction on the lead unit. The lead ship was laid down on 17 December 2021. Commissioning is planned from 2024 onwards.

The Intermediate Frigate (FTI) program responds to the need for a fleet of fifteen first-class frigates and allows the French Navy to operate in a crisis zone, as recommended in the White Paper on Defense and National Security of 2013. These frigates join the ten examples of the FREMM multipurpose frigate (Aquitaine) class and Horizon class.

Defence Minister Jean-Yves Le Drian announced the launch of the program on 29 May 2015 at the naval aviation base in Lann-Bihoué (Ploemeur, Morbihan). A total of five ships are planned for production, with delivery of the first taking the place within the time period originally planned for the last three planned Aquitaine-class frigates. In 2021 it was reported that work on the second and third frigates in the series would be accelerated with first steel cut for modules of the second ship of the class envisaged for October. The subsequent deal between France and Greece in 2021 to supply three FDI-class frigates to the Hellenic Navy meant that these two vessels would now be built for the Hellenic Navy. This pushed the delivery date for the next ships in the French Navy to 2026 and 2027.

These ships will incrementally supersede the La Fayette-class frigates ship for ship, in the role of first rank frigates. In the interim, a modernization of three vessels in the La Fayette class is being undertaken to extend their useful lives into the early 2030s.

According to Admiral Bernard Rogel and the Direction générale de l'Armement, the FDI are being endowed with significant anti-aircraft capabilities with active antenna radar and fixed planes, anti-submarine means (helicopter and towed sonar), and would have a displacement of 4,000 to 4,500 tonnes (3,900 to 4,400 long tons).

Greece signed an agreement with France's Naval Group to purchase three FDI frigates with an option for one more for the Hellenic Navy as part of a $5 billion defence package.