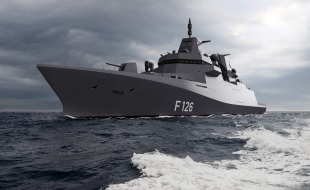 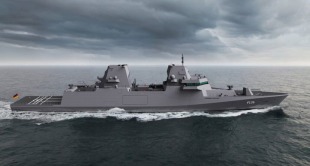 F126 or frigate 126 (Fregatte 126) is a planned German frigate class intended to replace the F123 Brandenburg-class frigates in the German Navy. The ships are to be the largest surface warships to join the Navy since World War II. The first ship is planned to be commissioned in 2028.

Until 1 January 2021, the project was known under the working title MKS 180 or Multi-Purpose Combat Ship 180 (Mehrzweckkampfschiff 180), with 180 indicating the classes planned complement.

The class is to be mission modular and is capable of accommodating so-called mission modules which include devices, space, sensors and weaponry necessary to carry out a given task optimally. If not in use, the modules can be maintained and replaced separate from the ship and also be exchanged between different ships in the class.

The ships are planned to replace the Brandenburg-class in their anti-submarine warfare role if fitted with a modular towed array sonar (the ASW module).

Similar to the Baden-Württemberg class however, they will also be able to stay at sea for up to two years without requiring maintenance at port, with crews rotating to and from the deployed ship every four months. This capability is expected to allow for a more efficient use of hulls by reducing the time spent during transfer from Germany to conflict zones such as the sea off the Horn of Africa where German ships repeatedly took part in counter-piracy missions such as Operation Atalanta, patrolling large areas for a long time. In this case, the «detention module» enables the crew to detain suspects and if need be quarantine them in a purpose-built medical facility.

Other intended uses are the enforcement of embargoes, escorting merchant shipping or commanding maritime task forces. In 2015, modules for mine countermeasures (MCM) and a diving chamber were planned as well.

In January 2020 after a five year long bidding process the Dutch Damen Group won the tender, although the ships will be constructed at the Blohm + Voss shipyard in Hamburg, Germany and at the Peene-shipyard in Wolgast, Germany, both owned by Lürssen Group.

The design is to pass a critical design review in early 2022, after which construction of the first ship will begin in 2023 while keel laying is intended for 2024. Currently no name for the first-of-class ship has been chosen.

While the fore ships will be constructed in Wolgast, the aft ships will be built in Kiel where both will be joined. Fitting, tests and trials are to take place in Hamburg. The Hamburg Ship Model Basin (HSVA) is conducting model-based flow testing.