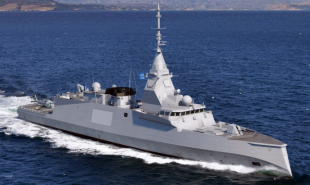 In September 2021, Greece signed an agreement with France's Naval Group to purchase three FDI frigates with an option for one more for the Hellenic Navy as part of a $5 billion defence package.

It was reported that the Hellenic Navy ships would eventually carry a more extensive weapons fit with launch tubes capable of carrying up to 32 Aster-30 air defence missiles (in 4 Sylver A-50 or 3 A-50 and 1 A-70 for 8 MdCN missile. This will permit the Hellenic Navy eventually to operate three ships with 32 aerial defence missiles plus 21 point defence missiles being also equipped with one Mk31 21-cell launcher of RAM Block 2B surface-to-air missiles, 8 Block 3 Exocet anti-ship missiles, 2 dual launchers MU90 torpedoes and CANTO torpedo countermeasures. Two of the vessels, destined for the French Navy in 2025, now will be delivered to the Hellenic Navy. The date of the construction agreement was anticipated to be at late 2021 or early 2022. In December 2021 it was reported that an agreement for construction had been signed by France and Greece with the actual contract for the construction of the ships having been signed on 24 March 2022.nIn February 2022, documents released by the Greek Parliament indicated that initially the first two frigates for the Hellenic Navy would be equipped similar to their French counterparts in a «Standard-1» configuration (with 16 Sylver A50 cells). By 2027 the two ships would be upgraded to a «Standard-2» configuration with 32 A-50 cells as well as with the RAM Block 2B. The third Hellenic Navy frigate would be built from the outset in the «Standard-2» configuration.

According to the Hellenic Navy, the ships will be named after three great ancient Greek admirals. These names had previously been used for the ex-US Charles F. Adams-class destroyers in service with the Hellenic Navy from 1991–2004.