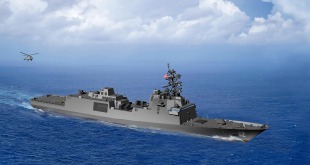 The Constellation class is a class of multi-mission guided-missile frigates under development for the United States Navy as a follow-on to the modular littoral combat ship. The U.S. Navy announced the FFG(X) frigate project in the United States Department of Defense Request For Information (RFI) on 10 July 2017.

The U.S. Navy selected five shipbuilders to evolve their designs into a prospective design for the proposed twenty FFG(X) guided-missile frigates. On 30 April 2020, it was announced that Fincantieri Marinette Marine had won the contract with its FREMM multipurpose frigate-based design. The project was later renamed FFG-62 program after the lead ship was named.

The U.S. Navy's intention to buy the first FFG(X) in 2020 did not allow enough time to develop a completely new design for the platform. Consequently, the U.S. Navy intended for the design of the FFG(X) to be a modified version of an existing «parent» ship design. So there was a competition for FFG(X) is envisioned to consider existing parent designs for a Small Surface Combatant that can be modified to accommodate the specific capability requirements prescribed by the U.S. Navy.

The U.S. Navy wanted a frigate that could keep up with the aircraft carriers and have sensors networked in with the rest of the fleet to expand the overall tactical picture available to the group. The FFG(X) will normally aggregate into strike groups and Large Surface Combatant led surface action groups, but also possess the ability to robustly defend itself during conduct of independent operations while connected and contributing to the fleet tactical grid.

The new frigate will have a minimum of 32 Mark 41 Vertical Launch System cells aboard the ship for primarily anti-air warfare for self-defense or escort missions.

The class will use a Combined Diesel Electric and Gas Hull, Mechanical and Electrical (HM&E) propulsion system which has never been used in any other U.S. Navy ship. The new propulsion system will be required to be tested on land, in order to reduce the risk of engine failure, which has plagued the previous LCS program.