CODLAD (COmbined Diesel-eLectric And Diesel) is a naval propulsion system in which an electric motor and a diesel engine act on a single propeller. The transmission system takes care of making one or both motors act on the propeller shaft.

This system that uses diesel engines for both propulsion and for the production of electricity for on-board services significantly reduces costs, as the number of diesel engines for the various ship services decreases and the electric motors need less maintenance. Furthermore, since electric motors can work more effectively in a larger number of revolutions, and being directly connected to the propeller axis, the transmission systems for coupling and decoupling the diesel-electric systems with the diesel engines used to have higher speeds. 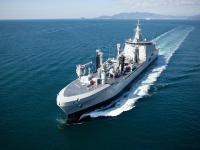