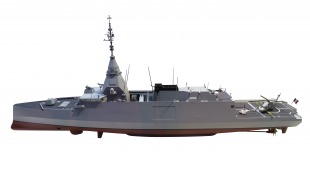 The French Defence Ministry announced the attribution to DCNS of a contract for the development and construction of five intermediate-size frigates (FTIs) intended for the French Navy on 21 April 2017.

The lead ship being named Admiral Ronarc'h. First steel was cut in October 2019 beginning construction on the lead unit. The lead ship was laid down on 17 December 2021.

The SEA FIRE all-digital multi-function radar with four fixed antennas, which will meet the requirements of a broad range of missions, from ship self-defence to extended air defence, and can deploy MBDA Aster 15/30; first SEA FIRE radar delivered for integration in first FDI unit in April 2021.

The compact version of the CAPTAS-4 towed-array sonar, delivers the same ultra-long-range detection performance as the original version of CAPTAS-4 with 20% lower weight and a footprint almost 50% smaller, claimed to be the best in its class by Thales.

The Aquilon integrated digital communications system, and an IFF (Identification Friend of Foe) associated with the SEA FIRE radar