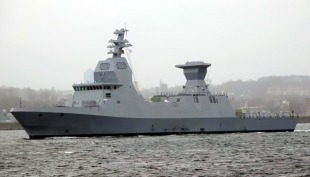 The Sa'ar 6-class corvette is a class of four German-made warships ordered for the Israeli Navy in May 2015. The ships' design will be loosely based on the German Braunschweig-class corvette, but with engineering changes to accommodate Israeli-built sensors and missiles such as the Barak 8 and the naval Iron Dome system. Elbit Systems has been awarded the contract to design and build the Electronic Warfare (EW) suites for the ships.

All four vessels will be constructed in Germany in a joint project by German Naval Yards Holdings and ThyssenKrupp Marine Systems. The first of the class is scheduled to get delivered in 2020. Construction cost is estimated at NIS 1.8 billion Israeli new shekel (NIS) or roughly 430-million Euro ($480-million). Israel will pay for two thirds of the cost and the German Government will subsidize a third of the corvettes' construction costs, as with the Dolphin-class submarines.

One of their roles will be to protect natural gas platforms in the Mediterranean Sea against possible sea-borne or rocket threats. The Lebanese Hezbollah group alleges that Israel's gas fields lie in Palestinian waters. It has threatened to target Israeli gas platforms.

The Sa'ar 6 has a displacement of almost 1,900 tons at full load and is 90 m (295 ft 3 in) long. It is armed with an Oto Melara 76 mm main gun, two Typhoon Weapon Stations, 16 vertical launch cells for Barak-8 surface-to-air missiles,40 cells for the C-Dome point defense system, 16 anti-ship missiles, the EL/M-2248 MF-STAR AESA radar, and two 324 mm torpedo launchers. It has hangar space and a platform able to accommodate a medium class SH-60-type helicopter.