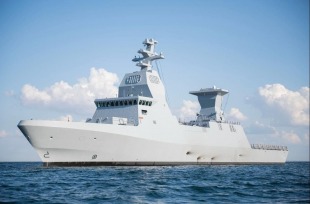 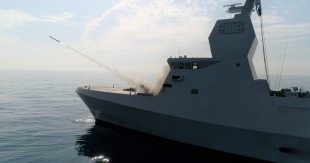 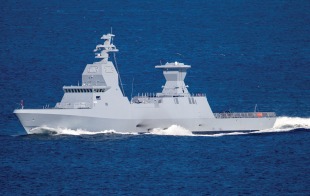 INS Atzmaut is a Sa'ar 6-class corvette of the Israeli Navy. She is the third ship of her class.

The Sa'ar 6-class vessels have a displacement of almost 1,900 tons at full load and is 90 m (295 ft 3 in) long. They are armed with an Oto Melara 76 mm main gun, two Typhoon Weapon Stations, 32 vertical launch cells for Barak-8 surface-to-air missiles, 20 cells for the C-Dome point defense system, 16 anti-ship missiles (likely Gabriel 5), the EL/M-2248 MF-STAR AESA radar, and two 324 mm (12.8 in) torpedo launchers. They have hangar space and a platform able to accommodate a medium class MH-60-type helicopter.

She was launched at German Naval Yards and ThyssenKrupp in Kiel. She will be expected to be commissioned over to Israeli Navy in November 2021. The ship was delivered to the Israeli Navy in July 2021 and is to be fitted with Israeli weapons and radar in Israel.