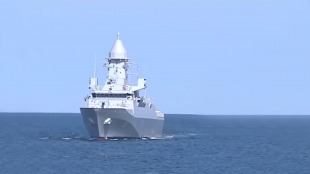 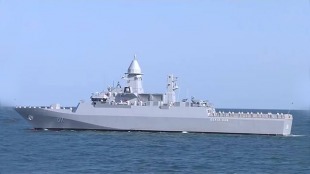 The Turkmen Armed Forces commissioned its first Turkmen-class corvette, the “Deniz Han” (pennant number 01), at Turkmenbashi Naval Base on 11 August 2021.

The corvette was named in honour of Deniz Khan (Tengis Khan) — one of the sons of the legendary ancestor of the Turkmens (Turks) Oguz Khan. Accordingly, in the Turkic tradition, Deniz Khan symbolizes the sovereignty and domination of the Turkic state in the seas.

Corvette (C 92) was developed to operate on different missions, mainly anti-air warfare, anti-surface warfare, anti-submarine warfare and patrol/escort. It is suitable for helicopter operations. The hull is built from AH 36 while the superstructure is built from Marine Al alloy. The ship is 91.4 metres, the beam is 13.3 metres and the draft is 3.5 metres. The platform’s displacement is roughly 1,600 tons. The maximum speed is 26 knots and the range at economic speed is 3,000 NM. The C 92 can be operated by a crew of 100. The sensors include combat management system, 3D air and surface surveillance radar, IFF system, ESM, electronic countermeasure and CHAFF/DECOY systems.

With the help of the latest technology and a digital system, the electronic map can track passenger and military vessels in the Caspian Sea. This process is carried out by means of specialized radar equipment designed to monitor the coastal part of the sea, and technical complexes on board the warships of the Navy. Also, with the help of digital equipment and satellite communications, the location of ships at sea, their provision with fuel and water are established. This allows the control center to maintain constant communication with military vessels. In the management department, the collected information is accumulated and processed. The equipment installed here facilitates this work and allows quickly sending information to the destination.