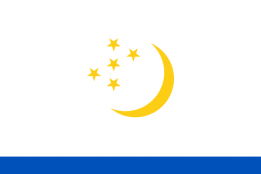 The Turkmen Naval Forces is the Navy branch of the armed forces of Turkmenistan. Turkmenistan's Navy Day is celebrated annually on October 9.

The Turkmenistan Navy was established in 1992. The naval forces were a branch of the Border Guard Service. The main naval base of Turkmenistan is Türkmenbas Naval Base located in the port of Turkmenbashi. In 2002, dozens of new patrol boats, such as Kalkan-Ms and Griff-Ts were purchased from Ukraine. A naval base in the Caspian Sea was created in 2009.

In 2010, the navy of Turkmenistan consisted of 16 patrol boats and 2000 people. In the same year, President Gurbanguly Berdimuhamedow announced plans to transform the Turkmanistan Navy as part of the border guards to an independent navy capable of performing limited combat operations. The plan included the purchase of a number of new warships, establishment of the Naval Military Institute, the Naval Academy, and the development of the Türkmenbaşy Naval Base, including the construction of the Ufre Turkmenbashi Shipyard. All this by 2015. The independent Navy of Turkmenistan was thus created on October 10, 2011 by the presidential decree.

In October 2011, the country received two Tarantul-class missile boats, in 2013 two large Arkadag-class patrol boats built in Turkey based on the Tuzla-class. In 2012, the construction of eight rocket boats derived from the Tuzla-class was ordered.