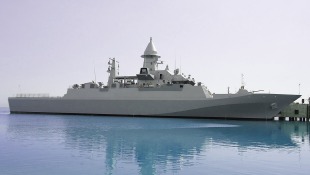 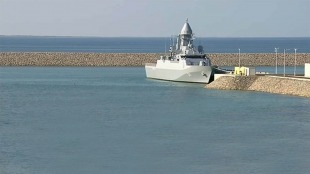 Turkmenistan Navy signed a contract in August 2019 with Turkish company “Gulhan & Dearsan Joint Venture” about the construction of a corvette. In accordance with the contract, Turkish shipyard Dearsan will build one 92 meters corvette for the Turkmen Naval Forces. The project of the contructing of ship for Turkmen Navy is called “Turkmen” class corvette. The manufacturer defines the corvette’s original class name as “C92.” The ship will protect the shores of the Caspian Sea. The ship has ASELSAN’s Gökdeniz anti-aircraft defence system on board. The joint venture Gülhan & Dearsan was created specifically for the joint design and construction of military ships. It is claimed that it is possible to build several more ships of this type for Turkmenistan in the future. The corvette construction was carried out by assembling from sections delivered from Turkey at the shipbuilding and ship repair plant of the State Border Guard of Turkmenistan in Ufra in Turkmenbashi (formerly Krasnovodsk).