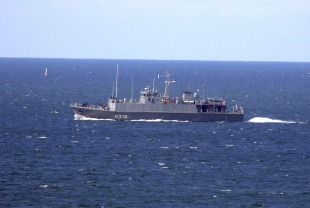 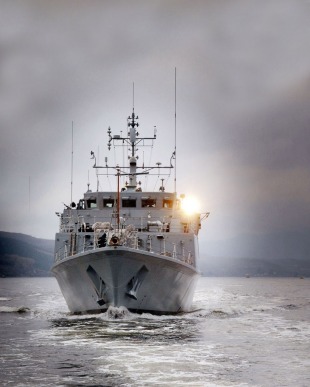 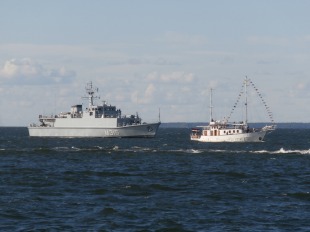 The ship is the third and final Sandown-class vessel to join the naval force after it's mine countermeasures vessel modernization programme. She is named after an ancient Estonian county Ugandi, between the east coast of Lake Võrtsjärv and west coast of Lake Pskov, bordered by Vaiga, Mõhu, Nurmekund, Sakala, Latgale, and Pskov.

Bridport was built by Woolston Yard of Southampton-based shipbuilders Vosper Thornycroft as one of the 12 ship class of Sandown-class minehunters.

In July 2004, the UK Ministry of Defence announced that as part of the restructuring of the Navy, the two oldest and one other Sandown-class minehunters would be retired by April 2005. Bridport was decommissioned and was then laid up awaiting a buyer or disposal. In September 2006, Estonia signed a contract to acquire the three vessels.

The former HMS Bridport was modernized and overhauled in Bay 1 of the Syncrolift at Rosyth. The project was started ahead of schedule to deconflict the programme. On 22 January 2009, the Estonian Navy flag was hoisted on the ship, and she was named ENS Ugandi during a ceremony at Rosyth Dockyard. It reached Estonia on 24 February 2009, the Estonian Independence Day, under the command of Lieutenant Senior Grade Marek Mardo. Since 28 October 2012, the ship carries the coat of arms of Otepää.

The vessel carries clearance divers and Remote Control Mine Disposal Systems. Unlike the previous Lindau-class minehunter, the vessel was built from glass reinforced plastic to reduce her magnetic signature. Other parts of the ship were constructed from non-ferrous metals for a similar reason. They are propelled by Voith Schneider Propellers and are very maneuverable due to two bow thrusters which gives an advantage when working with mines. She differs from the previous two Sandown-class vessels delivered to the Estonian Navy, as she has been fitted with a ZU-23-2 twin mount, 23 mm cannon system and a Klein 5000 sidescan sonar.

The ship's motto is in Latin: Semper Ante — which in English means: «Always In Front». The coat of arms was designed by Priit Herodes.