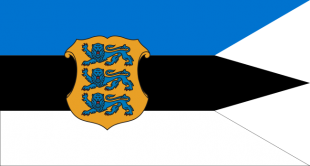 The Estonian Navy (Estonian: Eesti Merevägi), is the name of the unified naval forces among the Estonia Defence Forces.

With only four commissioned ships and displacement of under 10,000 tonnes, Estonian navy is one of the smallest navies in the world. Ship prefix is EML (Eesti Mereväe Laev/Estonian Navy Ship). The Estonian Navy has been reduced severely since the second half of the decade mainly due to insufficient maintenance, lack of funding and thereby training of personnel and timely replacement of equipment. Another possible setback could be attributed to Estonia's domestic lack of maritime defence policy strategy as the current navy neither operates a single traditional warship that could perform defensive or offensive operations nor coastal defense capabilities and maritime landing operations along its long and island rich territorial waters. The Estonian Navy has participated numerous times in NATO´s naval joint-exercises.