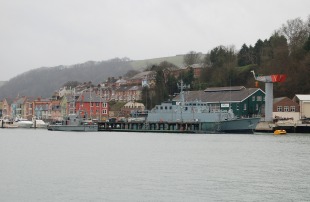 HMS Cromer is a Sandown-class minehunter commissioned by the Royal Navy in 1992. She was named after the North Norfolk seaside town of the same name.

She was decommissioned in 2001 before being refitted for use as a training ship at the Britannia Royal Naval College at Dartmouth. In keeping with tradition, for this role the ship has been renamed Hindostan. As she is not a commissioned ship she is not prefixed «HMS».