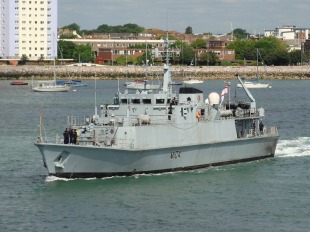 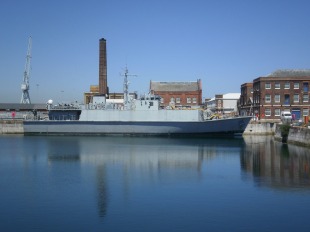 HMS Walney was one of four Sandown-class minehunters ordered from Vosper Thornycroft on 27 July 1987. She was laid down at Vosper Thoneycroft's Woolston, Southampton shipyard in May 1990, launched on 25 November 1991 and commissioned on 20 February 1993.

On 15 May 2006, HMS Walney and HMS Atherstone discovered a 1,000 lb (450 kg) World War II bomb whilst conducting a survey of the River Mersey. It was announced on 16 December 2009 that Walney would be decommissioned sometime in 2010. She was decommissioned in a ceremony on 15 October 2010 at her homeport, HMNB Clyde. Walney called in at her affiliated town of Barrow-in-Furness on her way to her final port of call, Portsmouth Naval Base where she remains laid up in 3 Basin. In 2014 the ship was listed for sale via the Disposal Services Authority.