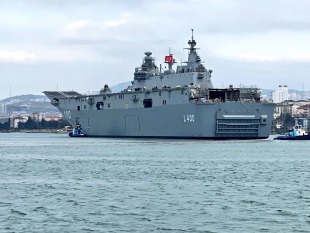 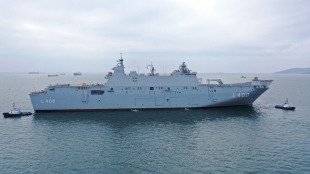 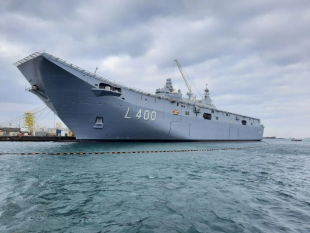 Namesake:
Peninsula of Anatolia (Turkish: Anadolu) which forms the majority of the land mass of Turkey
Operator:

TCG Anadolu (L 400) is an amphibious assault ship (LHD) of the Turkish Navy that can be configured as a light aircraft carrier. It is named after the peninsula of Anatolia (Turkish: Anadolu) which forms the majority of the land mass of Turkey. The construction works began on 30 April 2016 at the shipyard of Sedef Shipbuilding Inc. in Istanbul, with the keel being laid 7 February 2018, and is expected to be completed in 2021. The vessel is intended to meet the various needs and requirements of the Turkish Armed Forces, such as sustaining long-endurance, long-distance military combat or humanitarian relief operations; while acting as a command center and flagship for the Turkish Navy.

The Sedef–Navantia consortium won the tender for the LPD/LHD project of the Turkish Navy and TCG Anadolu (L 400) will use the same design as that of the Spanish ship SPS Juan Carlos I (L 61). All of the ship's weapons system will be procured by Turkish firms Aselsan and Havelsan. The ship will feature a Turkish combat management system, namely the GENESIS-ADVENT, which will be integrated by Aselsan and Havelsan. Aircraft Landing is assisted in all weather condition by Leonardo SPN-720 Precision Approach Radar.

Navantia will provide design, technology transfer, equipment and technical assistance to Sedef Shipyard of Turkey for the design and development of TCG Anadolu (L 400), which is classified as a Light Aircraft Carrier/LHD by Turkish Lloyd. It will be capable of operating the F-35B STOVL stealth multirole combat aircraft.