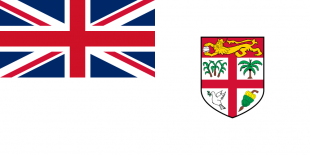 The 300-man Navy Unit Republic of Fiji Military Forces (RFMF) celebrated, on 25 July 2015, the fortieth anniversary of its founding. It was formed in 1975 (Naval squadron Royal Fiji Military Forces), following the government's ratification of the United Nations Law of the Sea convention. The Navy is responsible for maritime needs in border control, such as watching over Fiji's exclusive economic zone and organising task and rescue missions. It currently operates 9 patrol boats. Military aid is received from Australia, the People's Republic of China, and the United Kingdom (although the latter has suspended aid as a result of the 2006 military coup against the civilian government).

Speaking at 30th anniversary celebrations on 26 July 2006, Commander Bradley Bower said that the greatest challenge facing the navy of a maritime country like Fiji was to maintain sovereignty and the maritime environment, to acquire, restore, and replace equipment, and to train officers to keep pace with changing situations.