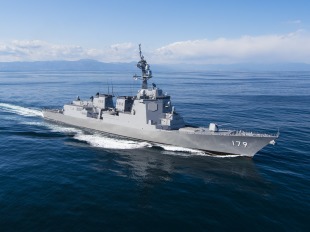 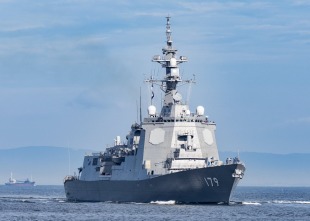 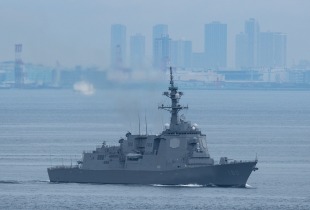 The Maya class of guided missile destroyers in the Japan Maritime Self-Defense Force is a modified version of the Atago class, being updated its Aegis Combat System and introduced electric propulsion system. Maya was commissioned on March 19, 2020. Haguro is scheduled to be commissioned in March 2021.

The Maritime Self-Defense Force (MSDF) began construction of the Aegis-equipped Kongō class from FY1988. And in FY2002 and 2003, a modified version, Atago class, was also added for its fleet.

While it shares the same design characteristics as the Atago class, the Maya class possesses a larger hull to install a hybrid-electric propulsion system. Maya-class destroyers are engineered with a COGLAG (COmbined Gas turbine-eLectric And Gas turbine) propulsion system, a modification of the combined gas and gas propulsion system employing turbine-electric transmission for low-speed cruising. The JMSDF had been testing a COGLAG propulsion system on JS Asuka. Then, the adoption of the system for surface combatants began with the Asahi class. While the Asahi-class system had a low voltage distribution of 450 volts, the Maya-class system is equipped with a more advanced system that can handle a high voltage distribution of 6,600 volts.

The JMSDF already uses an integrated electric propulsion system for auxiliary vessels, and is expected to expand to surface combatant ships in the future in light of its future weapon accommodation.

The Maya class features the newer Aegis Weapon System (AWS) Baseline 9C (referred as J7 in Japan), compared with the Atago class using the Baseline 7 system (now being updated to Baseline 9C with modernization). With this system, these destroyers are equipped with the Cooperative Engagement Capability (CEC) system. This will allow the ship to share surveillance or targeting information between other CEC equipped assets, whether that be from ships from the American or Australian Navy or from American or Japanese E-2 Hawkeye. In addion to the AWS, they are also equipped with an Aegis BMD 5.1 system; they are the first JMSDF Aegis vessels to be capable of ballistic missile defense (BMD) from the time of its commissioning.

In addition to the existing SM-2MR Block IIIB surface-to-air missiles, the SM-6 will also be installed in the future. The SM-6 missiles can be networked to the CEC system and thus allow it to receive targeting information from other CEC equipped sources. While the primary role of the SM-6 is to intercept enemy aircraft and cruise missiles, the SM-6 is also capable of intercepting ballistic missiles in their terminal phase and can double as an anti-ship missile.

As anti-ballistic missiles, these ships are equipped with the SM-3 Block IA, IB and IIA. The SM-3 Block IIA is the latest variant of the SM-3 missiles, being re-designed drastically to defend broader areas.

The ship will use Type 17 Ship-to-Ship Missiles (SSM-2), in addition to an existing Type 90 (SSM-1B). Future armaments for the ships is slated to include locally built railgun and laser point-defense system.