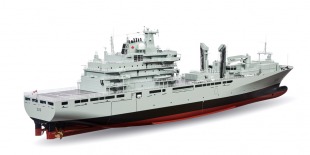 The Protecteur class (formerly known as the Queenston class) of naval auxiliaries for the Royal Canadian Navy (RCN) began as the Joint Support Ship Project, a Government of Canada procurement project for the RCN that is part of the National Shipbuilding Procurement Strategy. It will see the RCN acquire two multi-role vessels to replace the earlier Protecteur-class auxiliary oiler replenishment vessels that were operated by the RCN.

On 2 June 2013, it was announced that ThyssenKrupp Marine Systems Canada's Berlin-class replenishment ship was selected as the basis for the design of the Joint Support Ship Project. The Canadian vessels will be a variant of the Berlin class, as the design had to be optimized for Seaspan's yard in Victoria, British Columbia.

On 25 October 2013, the Minister of National Defence announced the JSS has been named Queenston class with two ships named, HMCS Queenston and HMCS Châteauguay. Their namesakes were to be the Battle of Queenston Heights and the Battle of Châteauguay, two battles during the War of 1812. A possible third ship in the class could be built, to be named HMCS Crysler's Farm, also named after a battle from the War of 1812. The option for the third vessel was dropped due to budget constraints. On 12 September 2017, the Canadian government announced the renaming of the class and vessels, taking the names of the ships of the class that they are to replace. Queenston became Protecteur and Châteauguay became Preserver. According to Vice-Admiral Ron Lloyd, commander of the Royal Canadian Navy, this was due to the ties both serving and former Navy personnel had with the names.

The Joint Support Ship Project consists of two multi-role vessels that will replace the former underway replenishment capability of the earlier Protecteur-class auxiliary vessel, as well as provide basic sealift for the Canadian Army, support to forces ashore, and command facilities for a Canadian Forces «joint force» or «naval task group». The Joint Support Ship Project should not be confused with the Amphibious Assault Ship Project, which is a proposed separate procurement project but one which has never advanced beyond a conception stage.

As of 2010, the Joint Support Ship Project envisioned several multi-role vessels capable of supporting the Royal Canadian Navy's warships at sea, as well as providing strategic sealift and some airlift for naval task groups or army operations. The vessels were envisaged as having a multi-purpose covered deck with the ability to carry up to 10,000 tonnes of ship fuel, 1,300 tonnes of aviation fuel, 1,100 tonnes of ammunition as well as 1,000–1,500 lane metres of deck space for carrying vehicles and containerized cargo. The vessels were also to have hospital facilities as well as a large helicopter deck with two landing spots, hangar space for four helicopters, and a roll-on/roll-off deck for vehicles onto a dock.

The first of class, Protecteur, is scheduled for a 2023 delivery. Preserver is expected to follow in 2025, though the dates for the operational service entry of both ships remain «under review». Given delays and in an effort to try to speed up the process of building the ships, steel was cut for the ships in 2018 during a lull in the construction of two Canadian Coast Guard science vessels at the yard. On 5 February 2019, it was announced that the construction of the first vessel in the class would be advanced and the ship would be completed at the Seaspan yard ahead of the construction of the planned Offshore Oceanographic Science Vessel (OOSV) for the Canadian Coast Guard. The second vessel would be completed only after the OOSV entered service. The first ship, Protecteur, was formally laid down on 16 January 2020. The formal contract for the construction of both ships was awarded in June 2020.