Where there are oil drilling rigs and gas production platforms, there is always the likelihood of the seabed being washed out on which they are installed. To combat this, the Dutch company Van Oord, specializing in dredging (one of the five largest companies in the world with this line of business), has several stone dumping vessels.

Vessels of this type are used to create the foundation of platforms, to strengthen drilling rigs or to level the pipelines by the method of leveling off the sea or ocean floor.

Such vessels are Tertnes, Trollnes and Nordnes, and in 2009 two more are planned to be lowered: Stornes and Simon Stevin, with carrying capacity of 30,000 and 32,500 tons respectively. The company has vast experience and knowledge in this field. The main activity is concentrated in the northern part of the North Sea.

Norway has an inexhaustible stock of stone. It is extracted in quarries by an explosive method, after which the stone is crushed and then by means of a conveyor it enters bunkers located practically on the whole deck of dumping vessels.

After loading, the vessel arrives at the work site and unloads the rubble through a pipe with a diameter of 1.1 meters. The depth to which the ship can lower the stone is 166 meters, and the shipping speed is 2000 tons per hour. A total of 24,000 tons of crushed stone can be placed on board a modern vessel. Accuracy of the installation provides measuring instruments, sonars, an unmanned device with illuminated cameras and a fiber-optic gyroscope Kongsberg. 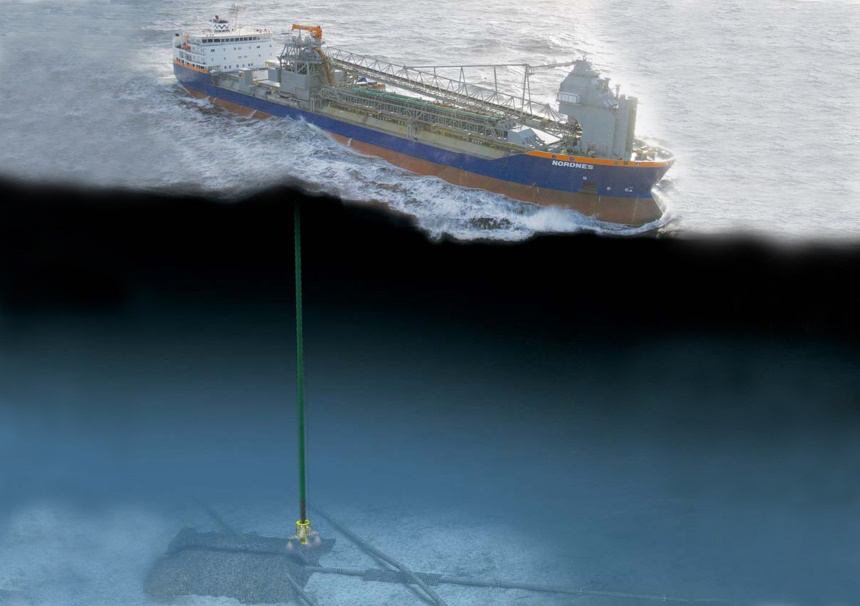 The vessel Nordnes was named after a beautiful peninsula in the town of Bergen in the center of Norway.

It was built from the converted Kvitnes dry cargo ship in 2005 at the shipyard Sietas Shipyard in Hamburg and is by far the largest of all existing dumping vessels. On ships of this class, there are a number of rules that all people on board must observe to ensure their safety — mandatory wearing protective helmets.

The Netherlands, because of their territorial location, unwillingly came to the need for courts of this kind. Thanks to such ships, the landscape was expanded, a seabed was created and reinforced for new berths and harbors, as well as many other works.

Another representative of the vessels of rock layers is Tertnes and its same type vessel Trollnes, which were also converted from dry cargo vessels in 1992 at the shipyard Ulsteinvik in Norway. In the international classification, vessels are of type D.P.F.F.P.V.

The vessels look quite unusual, but they do their useful and necessary work. Naval vessels are equipped with special equipment for determining the exact location of the seabed: sonars, sensors, video cameras. The depth to which the ship can lower 9,785 tons of stone is 130 meters.

In the seas and oceans, where there are farms with numerous windmills, irreversible processes of washing away underwater currents of soil occur, which lead to a change in the relief. For this purpose the Belgian company Jan de Nul together with Belgian Herbosch has in its arsenal a vessel called Pompei. The ship was built in 1988 and is also dumping, but for strengthening and leveling the seabed, a slightly different dump truck is used. From a sea vessel by tipping, tons of stone are unloaded to a depth of up to 65 meters. In one operation, about 1750 tons of stone can be dropped from the ship of the stone-laying machine. On board the vessel for loading and in a number of other cases, a hydraulic crane with a carrying capacity of up to 120 tons is used. There is no need for an accurate laying of the stone on the seabed, but to achieve the optimum degree of accuracy necessary to determine the alignment position, an unmanned deep-sea apparatus is used.It also monitors the amount of stone to be dropped to reduce its consumption. On board there is a command control panel with video cameras and indicators to monitor the progress of work. The ship Pompei is in great demand in countries where alternative energy is used.