The ‘Yavuz’ cruiser is the first ship named after the Ottoman Sultan, Yavuz Selim. The German Navy ordered the ship to ‘Blohm&Voss shipyard’ and keel laid down in August 1909 and launched on 28 March 1911 as SMS Goeben. She served in Germen Imperial Navy until August 1914.

In a period, when outbreak of Germen-French all out war is anticipated, the ship Goeben tasked to conduct bombardment against Filipovil Harbor to interdict French supply convoys. Following the successful mission, under the pressure of opposing naval units in operational area, the ship Goeben sought asylum in then, neutral Ottoman Empire’s territorial waters as passing through Çanakkale Strait.

In the political setting of the days, prior to start of World War I, Ottoman Empire declared to all parties that the ship ‘Goeben’ purchased from Germany and commissioned as Ottoman cruiser and named ‘Yavuz’. The ship was equipped with 3x28 cm main turrets and 15 cm side guns, had displacement of 28.000 tones with a maximum speed of 28 knots.

The ship Yavuz proudly served both in Ottoman and Turkish navies for long years, and had great influence on foreign policy. As the symbol of strength and deterrence, the ship Yavuz accomplished many missions successfully during World War I.

The ship was the striking unit of the navy and also played flag ship role provided support to other units and conducted raids to enemy shores and maintained the security of the vital sea lines of communication. During her operations, many ships are sunk by her fire, and she became the nightmare of the enemy.

The ship was taken out of service in compliance with Mondros treaty at the end of World War I. After the foundation of Turkish Republic, the ship was reactivated and served in Turkish Navy. During her second activation, the ship participated in many exercises, visited many foreign ports and proudly carried Turkish flag.

The ship ‘Yavuz’ also transported the body of the founder of the Turkish Republic, Mustafa Kemal Atatürk, from Istanbul to Izmit during his funeral. The ship decommissioned after a long honorable and proud service life in 1954 and her name engraved to golden pages of the Turkish Naval History. 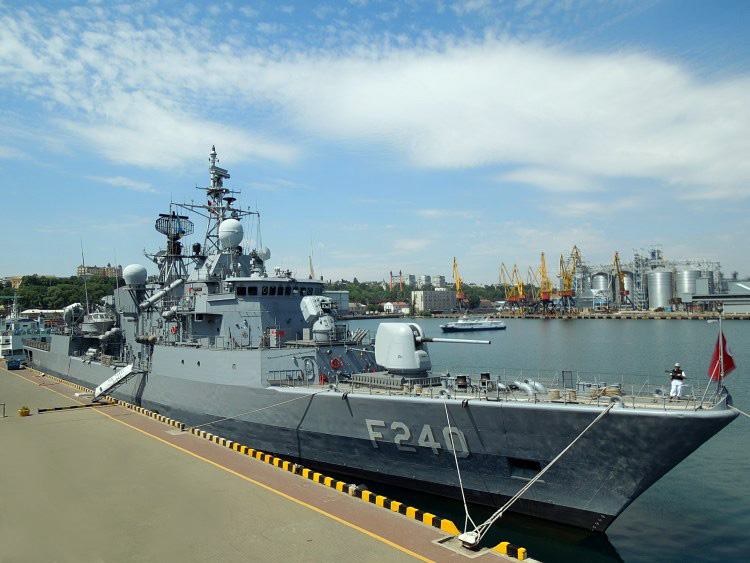 The ship Yavuz is a versatile, multi-purpose frigate and fully able to operate with equal effectiveness alone, or with in a task force.

The ship 'TCG Yavuz' was designed primarily for surface warfare and has the most advanced detection and fire control systems yet developed. The ship is also an outstanding platform for; Anti-Air Warfare (AAW) against air targets, Missiles (SAM and SSM ) Anti-Submarine Warfare (ASW) Electronic Warfare (EW) (ASW).

The ship 'TCG Yavuz' is the first fully automated command control combatant ship in the Turkish Navy. The frigate is powered with four MTU Diesel Engines and these engines produce more than 10.000 horsepower each to drive the ship at a maximum speed of 27 knots. The twin controllable, reversible pitch propellers, give the ship an exceptional degree of maneuverability. The sensors of the ship, with their higher power and improved signal processing equipment, are the first in the Navy to be linked directly to digital computers, thus ensuring swift, accurate processing of target information.

The aircraft carrier USS Lexington
The USS Lexington is the last operational unit of the Essex class of carriers that were designed just prior to World War II, and were modernized in the 1950s. This is AVT-16 as she appears today during operations in the Gulf of Mexico.

Gato-class submarine
In the Gato class, the U.S. Navy had found a fully capable boat with the characteristics necessary to fight a war in the Pacific. In the wake of the Pearl Harbor attack, it was obvious that the only way to halt the rapid expansion of Japanese conquests would be with an unconventional strategy, and to their credit, Admirals King and Nimitz came up ...

Android operating system in the service of the US Navy
American warships will soon be equipped with a standard 4G connection.

The newest aircraft carrier HMS Queen Elizabeth built
Five years later in the city of Rosite after cutting the first sheet of steel, the largest military ship of the Royal British Navy was named after Queen Elizabeth, who smashed a bottle of champagne on board the newest 65,000 ton aircraft carrier.
No comments yet
Log in or Register to write comments
shipshub.com © 2008 - 2021