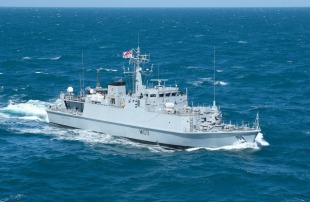 HMS Bangor is a Sandown-class minehunter commissioned by the Royal Navy in 1999. Designed to hunt mines in depths of up to 200m using the Sonar 2093 Variable Depth Sonar (VDS) meaning that she can conduct mine clearance operations throughout the continental shelf. She is named after the Northern Ireland seaside town of the same name, and the second Royal Navy vessel to bear the name.

Through October 2011 Bangor conducted maritime security patrols off Misrata during the NATO military intervention in Libya. Bangor participated in the 2013 Exercise Joint Warrior. She was stationed on the River Clyde for the 2014 Commonwealth Games in Glasgow. For the duration of the games the general public were allowed on board for a free tour.