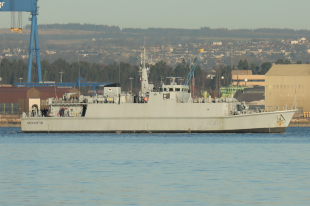 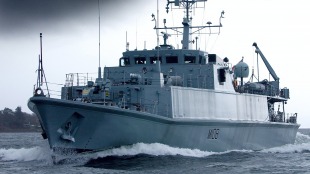 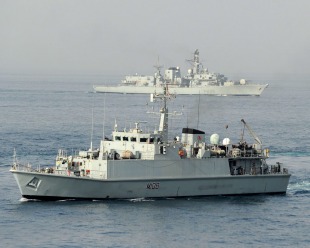 HMS Grimsby is a Sandown-class minehunter of the British Royal Navy, and the second ship to bear the name. She was built by Vosper Thornycroft, in Woolston, Hampshire, and commissioned in 1999. The class was originally named as the Single Role Minehunter and was planned to complement the capabilities of the preceding Hunt class and to be cheaper to build. Sandown-class MCMVs are highly manoeuvrable vessels due to being fitted with Voith-Schneider propulsors allowing rapid turning at slow speeds or whilst stationary.

On 24 January 2002, while her divers were searching for a 500 lb bomb in Gibraltar, she was approached by the Spanish patrol boat Conejera, which refused to leave when asked by the crew of HMS Ranger, claiming they were in Spanish waters.

At 2am on 29 September 2004 the 480-ton craft lost power and drifted into the Duchess M ferry (Gravesend to Tilbury), owned by the Lower Thames and Medway Passenger Boat Company in Gravesend, also damaging their Princess Pocahontas.

In 2012 she entered a 6-month Support Period (Docking) in Rosyth which will include replacing the entire fire detection system, upgrade communications systems and habitability improvements.

Grimsby is part of Mine Counter Measures Squadron 1 based at HMNB Clyde, Faslane, on the Gare Loch. Armament is primarily for self-defence against an Asymmetric warfare threat although a Point Defence capability exists. The fit of two Mk44 Miniguns has greatly improved the ship's force protection ability.