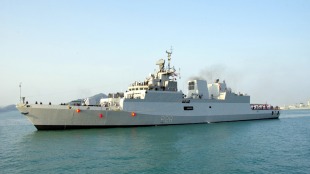 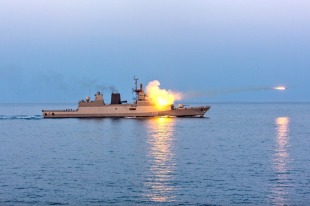 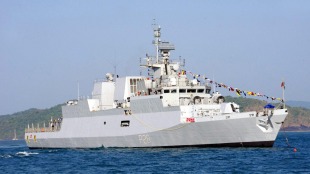 INS Kamorta is the first of four anti-submarine Kamorta-class stealth corvettes which has been built for the Indian Navy. It is a significant step towards India's pursuit for self-reliance in indigenous warship building, bringing closer home Indian Navy's quest to be a true Blue-Water Navy with ships and submarines designed and built within the country. She was designed and manufactured by GRSE, launched on 19 April 2010, as part of Project 28, approved in 2003. As in INS Shivalik, high-grade steel produced in India was utilized for its construction. She was delivered to Navy on 12 July 2014. She is the first indigenous anti-submarine corvette as well as the first indigenous stealth corvette built by India. She has enhanced stealth features such as an X Form Hull and inclined sides for low Radar cross-section, Infra-red suppression, and Acoustic quieting systems. Union minister of defense, Arun Jaitley commissioned the ship on 23 August 2014. It was named after Kamorta island in Andaman and Nicobar, India.

Kamorta was originally expected to be built using high-tensile imported steel. But lapses in imports lead it to be built by indigenously developed special grade high-tensile steel (DMR249A) produced by state-owned Steel Authority of India from its Bhilai Steel Plant. The ships employs very low under water voice signature and radar cross-section due to its ‘X’ form of hull and superstructure. She is the first Indian Navy ship to be built with carbon fiber reinforced plastic which reduces weight and life cycle maintenance costs. The hull of the ship encompassed the bulk of sensors and weapon systems that were also indigenously manufactured by various Indian industries.