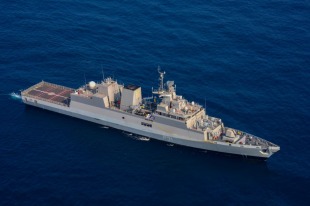 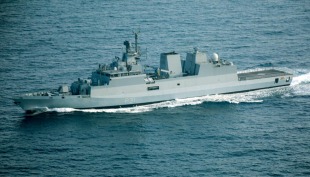 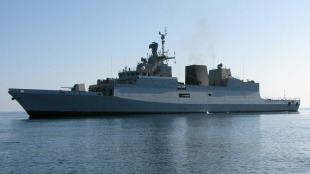 INS Kavaratti (P31) is an anti-submarine warfare corvette of the Indian Navy built under Project 28. It is the last of four Kamorta-class corvettes under various stages of induction with the Indian Navy. The ship was built by the Garden Reach Shipbuilders and Engineers, Kolkata, and launched on 19 May 2015. Kavaratti represents a leap forward in the Navy's attempts at indigenisation with as much as 90% of its content drawn from India itself.

The keel of Kavaratti was laid on 20 January 2012 and it was launched in Kolkata on 19 May 2015. The ship cost an estimated ₹1,700 crores. The ship takes its name from the Kavaratti, capital of the Union Territory of Lakshadweep in India. It is the successor ship to the INS Kavaratti, which was an Arnala-class corvette which participated in Operation Trident, and was later decommissioned in 1986.

Kavaratti has been designed by the Indian Navy’s Directorate of Naval Design as part of Project 28. It is capable of fighting under nuclear, biological and chemical environments. It will be a frontline warship of the Indian Navy with advanced stealth features and a low radar signature that enhances its anti-submarine warfare capability. The ship will have a complement of 17 officers and 106 sailors.

Kavaratti is India's one of the first ship to have a superstructure of carbon fibre composite material that has been integrated with its main hull resulting in lower top weight and maintenance costs and improved stealth features. The ship is 109 metres long and 12.8 metres broad and is highly maneuverable with a top speed of 25 knots. It has a displacement of 3300 tonnes and a range of about 3450 nautical miles at 18 knots. It is powered by 4 diesel engines that generate a combined power of 3000 kW and propelled by a main unit of four 3,888 kW diesel engines at 1,050 rpm.

Kavaratti is to be armed with a range of indigenously developed cutting-edge weapons and sensors, including «a medium-range gun, torpedo tube launchers, rocket launchers and a close-in weapon system». The ship will also contain an integrated communication system and an electronic warfare system.