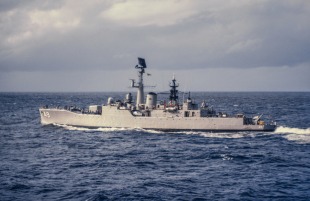 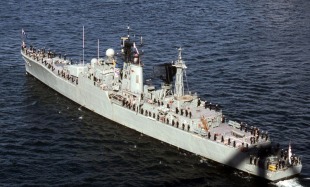 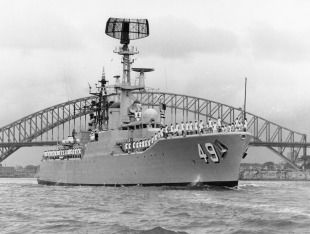 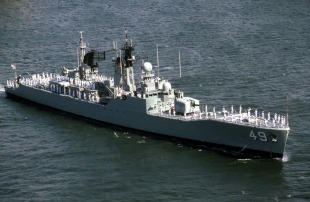 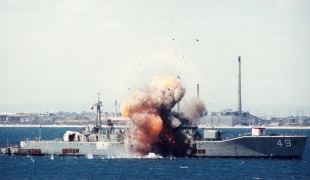 Namesake:
The Derwent River is a river located in Tasmania, Australia.
Operator:

HMAS Derwent (F22/DE 22/DE 49), named for the Derwent River, was a River-class destroyer escort (a licence-built Type 12M frigate) of the Royal Australian Navy (RAN). She was laid down by Williamstown Naval Dockyard in 1959, and commissioned into the RAN in 1964. During the ship's career, she was deployed to South East Asia on 23 occasions, including operations during the Indonesia-Malaysia Confrontation, and escort of the troopship HMAS Sydney to and from the Vietnam War. Multiple flag-showing cruises were also embarked upon, with port visits throughout Asia, the Indian Ocean, and the Pacific Ocean. Derwent was also briefly used to portray a fictional vessel for the British drama series Warship.

A major modernisation occurred between 1981 and 1985. In 1987, the ship's home port was changed to HMAS Stirling (Fleet Base West). In addition to usual exercises and operations, Derwent assisted with the 1987 America's Cup and the First Fleet Re-enactment Voyage. Between 1992 and 1993, the ship was used for pilotage training cruises. Derwent was paid off in 1994, and used by the Defence Science and Technology Organisation (DSTO) for ship survivability testing. Although it was originally intended to sink the ship as a dive wreck, the nature of the damage from the DSTO program made it unaffordable to render the ship diver-safe, so Derwent was towed to deep water off Rottnest Island and scuttled.