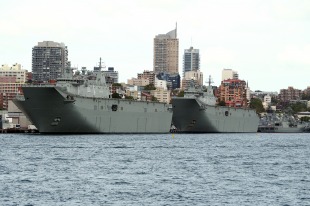 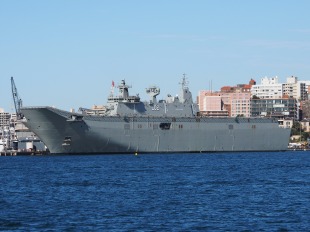 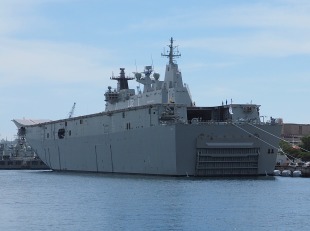 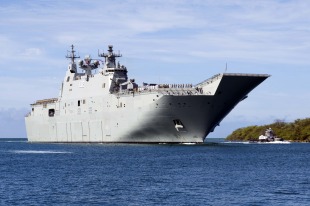 The Canberra class is a ship class of two landing helicopter dock (LHD) ships built for the Royal Australian Navy. Planning to upgrade the navy's amphibious fleet began in 2000, based on Australian experiences leading the International Force for East Timor peacekeeping operation. With a new climate for growing Australian Navy spending, a desire existed for forward defence capability for landing and supporting troops on Asian territory, that had never existed in Australian history, even with the old Majestic-class light fleet carriers, HMAS Melbourne and HMAS Sydney in the 1970s. In 2004, French company Direction des Constructions Navales (DCN) and Spanish company Navantia were invited to tender proposals, with DCN offering the Mistral-class amphibious assault ship and Navantia proposing the «Buque de Proyección Estratégica» design (later commissioned as Juan Carlos I). The Spanish design was selected in 2007, with Navantia responsible for construction of the ships from the keel to the flight deck, and BAE Systems Australia handling the fabrication of the superstructure and fitting out.

Construction of the first ship, HMAS Canberra, commenced in late 2008, with the hull launched in early 2011, and sea trials in early 2014. Canberra was commissioned in November 2014. Work on the second vessel, HMAS Adelaide, started in early 2010. Adelaide was commissioned in December 2015. They are the largest vessels ever operated by the RAN, with a displacement of 27,500 tonnes (27,100 long tons; 30,300 short tons).

The ships are home-ported at Fleet Base East in Sydney (which has prompted complaints from nearby residents about machinery noise, exhaust fumes, and blocked views) and will regularly operate out of Townsville, the location of Lavarack Barracks, home of the Australian Army's 3rd Brigade. In addition to being located in North Queensland close to Asia and the Pacific Islands, one of the 3rd Brigade's infantry battalions, the 2nd Battalion, Royal Australian Regiment (2 RAR), was selected to become the Army's specialist amphibious infantry battalion.

The Canberra-class vessels are 230.82 metres (757 ft 3 in) long overall, with a maximum beam of 32 metres (105 ft 0 in), and a maximum draught of 7.08 metres (23 ft 3 in). Keeping the maximum draught low was an important factor during design, allowing the ships to operate in littoral waters and small harbours. At full load, each ship will displace 27,500 tonnes (30,300 short tons; 27,100 long tons), making them the largest vessels to serve in the RAN. The Canberras have the same physical dimensions as Juan Carlos I, but differ in the design of the island superstructure and the internal layout, in order to meet Australian conditions and requirements. Unlike the Spanish vessel, the Australian ships are built to meet Lloyd's Naval Rules.

Each ship is fitted with a Saab 9LV Mark 4 combat management system. The sensor suite includes a Sea Giraffe 3D surveillance radar, and a Vampir NG infrared search and track system. For self-defence, the LHDs are fitted with four Rafael Typhoon 25 mm (1.0 in) remote weapons systems (one in each corner of the flight deck), six 12.7 mm (0.5 in) machine guns, an AN/SLQ-25 Nixie towed torpedo decoy, and a Nulka missile decoy. Planned upgrades include the installation of up to three Phalanx CIWS from 2018. Defence against aircraft and larger targets is to be provided by escort vessels and air support from the Royal Australian Air Force (RAAF). The ships' companies consist of 358 personnel; 293 RAN, 62 Australian Army, and 3 RAAF.

The LHDs are able to transport 1,046 soldiers and their equipment, and can carry 1,600 in overload conditions. The embarked force is called the Amphibious Ready Element Landing Force (ARE-LE) based on an infantry company of up to 220 soldiers. Army planners considered several options for forming an amphibious force including training a dedicated infantry battalion, training several battalions with battalion rotations or creating a brigade size force similar to the U.S. Marines MEU and Royal Marines 3 Commando Brigade structure. In December 2011, 2nd Battalion, Royal Australian Regiment (2RAR) was selected to develop the initial amphibious capability with the Chief of Army stating that as the capability is developed a future model for the force will be decided. A special forces capability will be provided by the 2nd Commando Regiment with the potential in the future for elements of 2RAR to be trained in certain special forces skills. Two vehicles decks (one for light vehicles, the other for heavy vehicles and tanks) have areas of 1,880 square metres (20,200 sq ft) and 1,410 square metres (15,200 sq ft) respectively, and between them can accommodate up to 110 vehicles. The heavy vehicle deck may alternately be used for cargo, with a capacity of 196 shipping containers. Each ship has a 69.3-by-16.8-metre (227 by 55 ft) well deck, that houses up to four LHD Landing Craft (LLC, the RAN designation for the LCM-1E), which can be launched and recovered in conditions up to Sea State 4. Twelve were ordered from Navantia, which delivered them in batches of four during 2014 and 2015. Six LLC are assigned to each LHD, with the additional craft used for training and trials at shore bases, and rotated to their parent ship when embarked craft require maintenance. The well deck also has room for four rigid-hulled inflatable boats (although these will not be carried as standard), and can be used by other nations' landing craft and amphibious vehicles.

The flight deck is 202.3 by 32 metres (664 by 105 ft) and sits at a height of 27.5 metres (90 ft), with six spots for helicopters up to MRH-90 size to operate simultaneously. Alternately, helicopters up to Chinook size can take off or land simultaneously on four spots on the flight deck. Flight operations can be conducted up to Sea State 5. The standard air group aboard these ships will be a mix of MRH-90 transport helicopters and S-70B Seahawk anti-submarine helicopters. The 990 square metres (10,700 sq ft) hangar deck can accommodate eight medium-size helicopters, and an additional ten can be carried if the light vehicle deck is used for additional helicopter space. Two aircraft lifts (one large one centre-aft, and a smaller one to starboard and in front of the island superstructure) connect the flight and hangar decks.

Navantia was contracted to construct the hulls from 104 'blocks' or 'modules', which were fabricated individually at Navantia's facilities in Ferrol and Fene, then combined on the slipway at the Ferrol shipyard. The Canberras were built up to the flight deck, launched, then transported by Dockwise's heavy lift ship, Blue Marlin, to Williamstown, Victoria, where the installation of the island superstructure and the internal fit out of the hull was completed by BAE Systems Australia (which acquired Tenix in mid-2008).

Construction of Canberra began in September 2008, when the first steel was cut. The first three blocks were laid down on 23 September 2010. She was launched on 17 February 2011. The hull was loaded onto the heavy lift ship Blue Marlin on 4 August 2012, with Blue Marlin departing Ferrol for Williamstown on 17 August, and arriving in Port Phillip on 17 October. Canberra commenced sea trials on 3 March 2014. Contractor-run sea trials concluded in early September, and Canberra was commissioned into the RAN on 28 November 2014.

Work on Adelaide began during February 2010, when the first steel was cut. The first hull blocks were laid down on 18 February 2011, and Adelaide was launched on 4 July 2012. Initially, the ship was due to reach Australia in early 2013 to begin final fit out, but this did not occur. The hull was loaded onto Blue Marlin on 10 December 2013 in Vigo Bay. Blue Marlin and Adelaide arrived at Williamstown on 7 February 2014. Entry into RAN service was originally planned for mid-2015, but as of July 2011, this had been pushed back to sometime in 2016. Fitting out of the ship progressed at a faster rate than expected, which has brought the predicted commissioning date back to late 2015. After sea trials ended in October, Adelaide was commissioned on 4 December 2015. Although Canberra was identified as «LHD01» and Adelaide as «LHD02» during construction, the ships were commissioned with the pennant numbers LHD 02 and LHD 01 respectively. The reversal of the numbers causes the new ships' pennants to correspond to the Adelaide-class frigates with the same names.