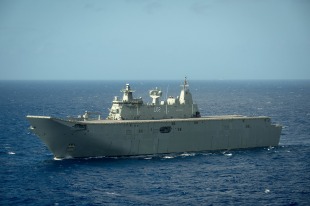 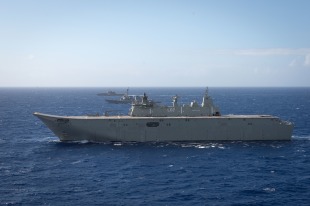 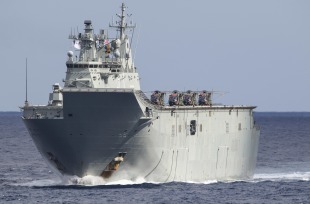 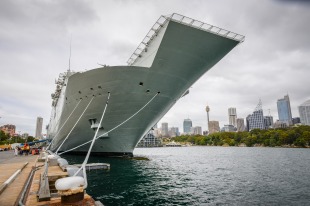 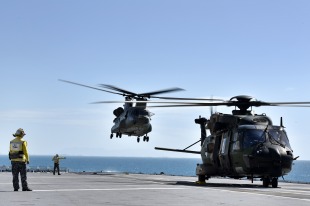 HMAS Canberra (L02) is the lead ship of the Canberra-class landing helicopter dock in service with the Royal Australian Navy (RAN). It is the current flagship of the RAN fleet. Construction of the ship started in Spain in 2008, with the hull launched by Navantia in 2011. The hull was then transported to Australia in late 2012 for completion by BAE Systems Australia. Canberra was commissioned on 28 November 2014.

The Canberra class design is based on the warship Juan Carlos I, built by Navantia for the Spanish Navy. The contract was awarded to Navantia and Australian company Tenix Defence following a request for tender which ran from February 2004 to June 2007, beating the enlarged Mistral class design offered by French company Direction des Constructions Navales. Canberra has the same physical dimensions as Juan Carlos I, but differs in the design of the island superstructure and the internal layout, in order to meet Australian conditions and requirements. Unlike the Spanish vessel, the Australian ships are built to meet Lloyd's Naval Rules.

Each ship is fitted with a Saab 9LV Mark 4 combat management system. The sensor suite includes a Sea Giraffe 3D surveillance radar, and a Vampir NG infrared search and track system. For self-defence, the LHDs will be fitted with four Rafael Typhoon 25 mm remote weapons systems (one in each corner of the flight deck), six 12.7 mm machine guns, an AN/SLQ-25 Nixie towed torpedo decoy, and a Nulka missile decoy. Defence against aircraft and larger targets is to be provided by escort vessels and air support from the Royal Australian Air Force (RAAF). The ships' companies will consist of 358 personnel; 293 RAN, 62 Australian Army, and 3 RAAF.

The LHDs will transport 1,046 soldiers and their equipment. Canberra will be capable of deploying a reinforced company of up to 220 soldiers at a time by airlift. Two vehicles decks (one for light vehicles, the other for heavy vehicles and tanks) have areas of 1,880 square metres (20,200 sq ft) and 1,410 square metres (15,200 sq ft) respectively, and between them can accommodate up to 110 vehicles. The well deck will carry up to four LHD Landing Craft (LLC), which can be launched and recovered in conditions up to Sea State 4. The flight deck can operate six MRH-90-size helicopters or four Chinook-size helicopters simultaneously, in conditions up to Sea State 5. A mix of MRH-90 transport helicopters and Sikorsky S-70B Seahawk anti-submarine helicopters will be carried: up to eight can be stored in the hangar deck, and the light vehicle deck can be repurposed to fit another ten. The ski-jump ramp of Juan Carlos I has been retained for the RAN ships, although fixed-wing flight operations are not planned for the ships.