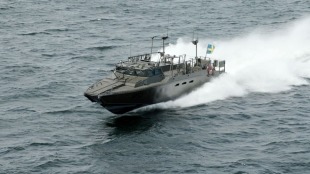 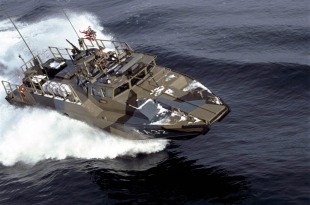 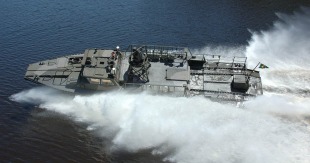 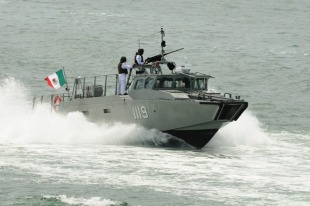 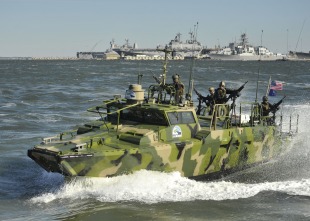 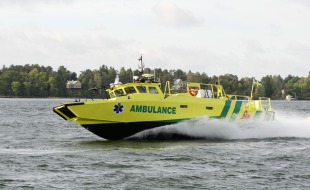 Combat Boat 90 (CB90) is a class of fast military assault craft used by several countries after being originally developed for the Swedish Navy by Dockstavarvet. Its name means Combat Boat 90 Half; the 90 refers to the year of acceptance (1990) and Half refers to the fact that it can carry and deploy a half platoon of amphibious infantry (18 men) fully equipped. The CB90 is an exceptionally fast and agile boat that can execute extremely sharp turns at high speed, decelerate from top speed to a full stop in 2.5 boat lengths, and adjust both its pitch and roll angle while under way. Its light weight, shallow draught, and twin water jets allow it to operate at speeds of up to 40 knots (74 km/h) in shallow coastal waters. The water jets are partially ducted, which, along with underwater control surfaces similar to a submarine's diving planes, gives the CB90 its manoeuvrability.

In addition to the many variants in service with the Swedish Navy under the «Stridsbåt 90H» designation, the CB 90 has been adopted by the navies of Norway (as the S90N), Greece, Mexico (as the CB 90 HMN), the United States (as the Riverine Command Boat), and Malaysia.

Several CB90 H have been converted by the Swedish Navy to fill various roles:

The CB90 L is outfitted for battalion-level command and control, with computer and communications equipment and an auxiliary generator to provide electrical power when the engines are not running. The L stands for ledning (command or leadership).

The CB90 KompL is a plain CB90 H in which portable computer and communications equipment has been installed, allowing it to temporarily provide company-level command and control. Electrical power is provided by a rather loud portable generator installed on deck.

The CB90 HS is designed for overseas peace-keeping and rescue operations. It is modified to keep its crew comfortable in Mediterranean conditions, with air conditioning, an auxiliary generator, a head, and more comfortable crew stations. More importantly, it is armored, and its engines have been upgraded to compensate for the added weight.

At least one CB90 H, pennant number 802, is equipped with a decompression chamber.

The Swedish Police operate one unarmed CB90 H equipped with bunks, a pantry and a crew lounge.

Hellenic Coast Guard operate also since 1998 three CB90 under the CB90HCG which is a slightly different version of the Norwegian Navy Version.

At least one CB90N has been reconfigured into a floating ambulance.

In 2004, the Royal Norwegian Navy conducted tests (including a live fire exercise) to evaluate the effectiveness of the SB90N as an aiming and launching platform for the Hellfire missile. One CB90N was equipped with stabilized Hellfire-launcher based on the Protector (RWS), and its machine gun was replaced with a gimbal-mounted sensor package containing visible-light and infrared cameras and a laser designator. Although the tests were successful, there is currently no indication that the Royal Norwegian Navy will actually deploy CB90Ns armed with Hellfire missiles in regular service. The Hellfire can still be carried on the boats without launching platforms and be fired from shore with the Portable Ground Launch System.

The CB90s are used by the Coastal Ranger Commando.