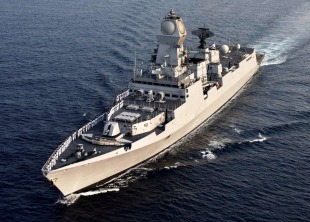 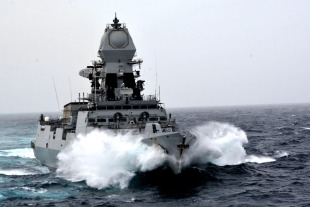 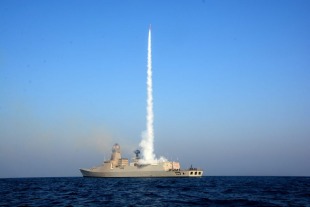 The «Kolkata class» (Project 15A) are a class of stealth guided missile destroyers constructed for the Indian Navy. The class comprises three ships – Kolkata, Kochi and Chennai, all of which were built by Mazagon Dock Limited (MDL) in India, and are the largest destroyers to be operated by the Indian Navy. Due to delays in construction and sea trials, the initial commissioning date of the first ship of the class was pushed back from 2010 to 2014.

The destroyers are a follow-on of the Project 15 Delhi-class destroyers, but are considerably more capable due to major improvements in the design, the addition of substantial land-attack capabilities, the fitting-out of modern sensors and weapons systems, and the expanded use of net-centric capability such as Cooperative Engagement Capability.

The class have a length of 163 m (534 ft 9 in), a beam of 17.4 m (57 ft 1 in) and a draught of 6.5 m (21 ft 4 in). The ship's power and propulsion features a combined gas and gas system utilizing four DT-59 reversible gas turbines. This configuration allows the ship to reach speeds in excess of 30 knots (56 km/h; 35 mph). Aviation facilities include a large flight deck, which was re-designed to handle larger helicopters than the Delhi class, and an enclosed hangar for up to two maritime helicopters.

The primary radar sensor of the class is the EL/M-2248 MF-STAR multi-mission AESA. It is also equipped with Thales LW-08 long range volume search radar.

The class is designed for network-centric warfare such as Cooperative Engagement Capability, where they operate wide area air defense, distributing assets and control over different platforms and locations, and harnessing multiple sensors & effectors into a single air defense system. In May 2019, 2 ships of the class conducted the maiden cooperative engagement firing of the Barak 8 / MRSAM by using the Joint Taskforce Coordination (JTC) mode to intercept several simultaneous aerial targets involving two complex scenarios at extended ranges. With it, the Indian Navy became the second naval service in the world after United States, and the first in Asia to have developed and deployed it. The capability is to be rolled out on all future major warships of the Indian Navy.

The supersonic BrahMos anti-ship and land-attack missiles are the primary offensive armament of the Kolkata class. The BrahMos missiles are fitted into a 16-cell Universal Vertical Launcher Module (UVLM) allowing one missile per launch silo, and all 16 missiles can be fired in salvo.

The class carry a 76 mm (3 in) naval gun located forward of the bridge which provides limited anti-shipping capability and anti-air capability in addition to its naval gun fire-support role for land based operations.

For anti-submarine warfare, the Kolkata class are equipped with a torpedo launching system via four torpedo tubes and two RBU-6000 anti-submarine rocket launchers.

Forty lakh (four million) lines of codes have been written to develop the advanced combat management system onboard INS Kochi. The system is designed so that all the data about the surrounding threat comes in one place, along with analysis about the kind of threat. The system also advises the commanding officer about the kind of weaponry he should use to tackle the threat in real-time. The ship is equipped with sophisticated digital networks, such as Asynchronous Transfer Mode based Integrated Ship Data Network (AISDN), Combat Management System (CMS), Automatic Power Management System (APMS) and Auxiliary Control System (ACS). The AISDN is the information highway on which data from all the sensors and weapon ride. The CMS is used to integrate information from other platforms using indigenous data-link system, to provide Maritime Domain Awareness. The intricate power supply management is done using APMS, and remote control and monitoring of machinery is achieved through the ACS.