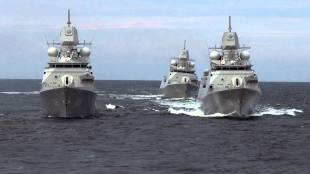 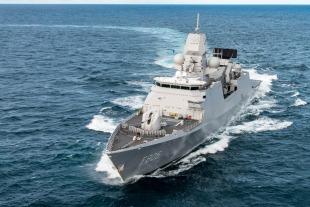 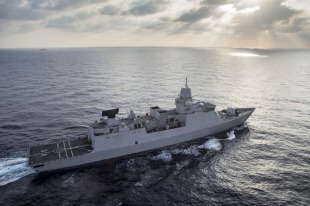 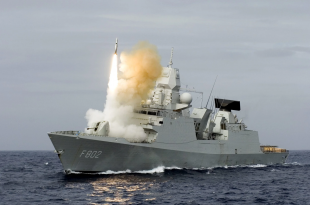 These ships were optimized for antiaircraft warfare and command. For this role the ships are equipped with an advanced sensor and weapons suite. The primary sensors for this role are the long range surveillance radar SMART-L and the multifunction radar APAR. The SMART-L and APAR are highly complementary, in the sense that SMART-L is a D band radar providing very long range surveillance while APAR is an I band radar providing precise target tracking, a highly capable horizon search capability, and missile guidance using the Interrupted Continuous Wave Illumination (ICWI) technique, thus allowing guidance of 32 semi-active radar homing missiles in flight simultaneously, including 16 in the terminal guidance phase. The primary antiaircraft weapons are the point defence Evolved Sea Sparrow Missile and the area defence RIM-66 Standard Missile (SM-2) Block IIIA. The Mk 41 Vertical Launch System is used to house and launch these missiles. 32 Evolved Sea Sparrow Missile and 32 Standard Missile SM-2 Block IIIA are carried.

The Navy is investigating the use of these ships for the role of Ballistic Missile Defence (BMD). During tests carried out by HNLMS Tromp in the Pacific Ocean near Hawaii, experimental modifications to the SMART-L to allow even longer range were proven. A study by the Koninklijke Marine, the Netherlands Defence Material Organization, Thales Nederland, Raytheon Missile Systems, Johns Hopkins University Applied Physics Laboratory, and Lockheed Martin has been conducted to establish the feasibility of modifying the De Zeven Provinciën class to provide it the capability to intercept ballistic missiles. In particular, the study examined the feasibility of integrating the SM-3 Block IB missile with the SMART-L and APAR radars. The study concluded that – with certain modifications to the SMART-L and APAR, as well as to the ship's Combat Management System and the missile itself – BMD with the De Zeven Provinciën class could be achieved. During a 2015 very large NATO exercise the BMD capabilities were proven, the sensor suite discovered ballistic targets, and the ship destroyed them using both its own SAM missiles, as well as using a U.S. Navy destroyer's missiles, by providing target data and missile guidance.

A contract was awarded for the radar modification in June 2012, operational tests & live firing show the performance to exceed expectations. The De Zeven Provinciën-class ships will get the new SMART-L Mk2 radar that can detect ballistic missiles at a range of 2,000 km (1,200 mi). The Dutch minister promised also that the APAR radar will have a bigger range than 400 km (250 mi) as the Netherlands is the first country to participate as an active missile shield for NATO.

In late 2011, the Ministry of Defence announced a modernization program to upgrade the SMART-L early-warning radar so that De Zeven Provinciën-class frigates can detect and track ballistic missiles at extended range. In 2018 plans were announced to acquire the BMD-capable SM-3 surface-to-air missiles as the ships are provisioned for an extra 8-cell vertical launch module, De Zeven Provinciën-class frigates can pass on the tracking and detection data to other sea-based or land-defense BMD assets, including U.S. Navy's warships, that can deal with a ballistic missile threat. This modernization program is scheduled for completion by late 2017 for the entire De Zeven Provinciën class.

On 3 May 2018 the Dutch Secretary of Defence, Barbara Visser, informed the Dutch national parliament that the evolved sea sparrow missile (ESSM) aboard the De Zeven Provinciën-class frigates will be upgraded from block 1 to block 2. This upgrade will be completed by 2024 and will allow the frigates to deal with the growing threat of modern anti-ship missiles. ESSM Block 2 allows the four frigates to defend against missiles that have greater speed, agility and perform unexpected movements. The current Harpoon surface-to-surface missile (SSM) will also be replaced with a new SSM by 2024. Furthermore, the current Otobreda 127/54 Compact cannon will be replaced with Otobreda 127/64 cannons. The new cannon must be able to fire multiple types of ammunition, including in the future precision-guided ammunition. The project costs between € 100 million and € 250 million, and will be take place between 2018 and 2023. Lastly, the Goalkeepers will be upgraded to a new version and all ships will have two installed as originally designed, they will eventually be replaced after 2025 by a new system.

In the Strategic Defence Review 2022 the acquisition of RIM-161 Standard Missile 3 (SM-3) and BGM-109 Tomahawk was announced for which the Mk41 vertical launch systems will be expanded with an additional unit of 8 cells.

As noted above, these ships were optimized for antiaircraft warfare, but they also have weapons on-board capable of attacking surface and submarine targets, for example: the RGM-84F Harpoon missile and Mk. 46 torpedoes. In a new defense Study published by the Dutch government in March 2018, it was stated the frigates will receive a new surface-to-surface missile to succeed the Harpoon Block 1D.

Proposals to equip the Zeven Provinciën-class frigates with a total of 32 BGM-109 Tomahawk (8 per ship) cruise missiles were evaluated, but these were shelved in May 2005 but reconfirmed in 2022.

In 2020 it was announced that these intensively used ships will not be replaced as planned around 2025. The Royal Netherlands Navy and the German Navy will cooperate towards a joint platform design to replace both the Sachsen-class frigates and De Zeven Provinciën-class frigates from 2030 — 2035 onwards. 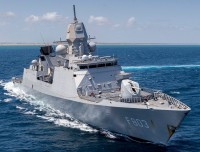 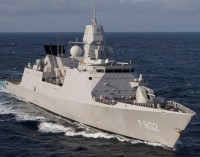