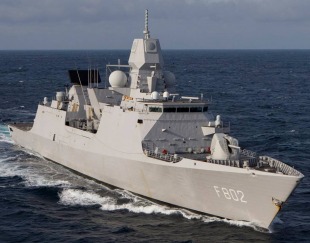 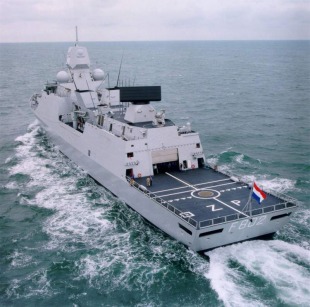 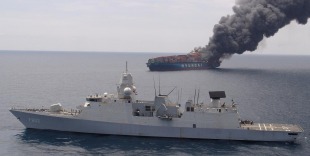 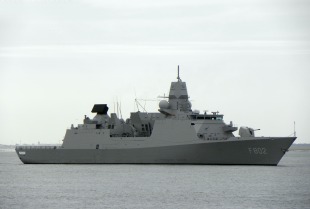 Namesake:
The United Provinces of the Netherlands
Operator:

HNLMS De Zeven Provinciën (F802) is the first ship of the De Zeven Provinciën-class air defence and command frigates in service with the Royal Netherlands Navy (RNLN). There are three other ships in this class, HNLMS Tromp (F803), HNLMS De Ruyter (F804), and HNLMS Evertsen (F805).

De Zeven Provinciën is the eighth ship in the Royal Netherlands Navy to carry this name. The name refers to the original seven Dutch provinces which together formed the Union of Utrecht.

She was built by Damen Schelde Naval Shipbuilding (formerly the Koninklijke Schelde Groep) in Vlissingen. Her design incorporates stealth technology, as well as advanced radars of Dutch design such as SMART-L and APAR.

In November 2003, approximately 200 nautical miles (370 km; 230 mi) from the Azores, De Zeven Provinciën conducted her first live firings of these missile systems. The firings involved a single ESSM and a single SM-2. These firings were particularly significant in that they were the first ever live firings involving a full-size ship-borne Active Electronically Scanned Array (i.e., APAR) guiding missiles using the Interrupted Continuous Wave Illumination (ICWI) technique in an operational environment.

Further live firings were performed by De Zeven Provinciën in March 2005, again in the Atlantic Ocean approximately 180 nautical miles (330 km; 210 mi) west of the Azores. The tests involved three live-firing events including firing a single SM-2 at an Iris target drone at long range, a single ESSM at an Iris target drone, and a two-salvo launch (with one salvo comprising two SM-2s and the other comprising two ESSMs) against two incoming Iris target drones. The long-range SM-2 engagement apparently resulted in an intercept at a range of greater than 100 km (62 mi) from the ship, with a missile-target miss distance of 8 feet (2.4 m) (the warhead's proximity fuze having been disabled for the purposes of the test).