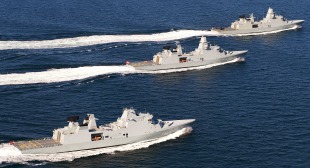 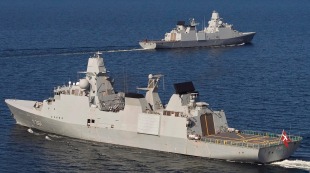 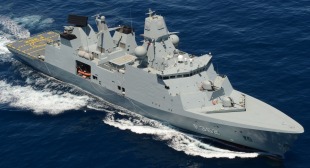 The Iver Huitfeldt class is a three-ship class of air defence frigates that entered service with the Royal Danish Navy in 2012 and 2013.

The class is built on the experience gained from the Absalon-class frigates, and by reusing the basic hull design of the Absalon class, the Royal Danish Navy have been able to construct the Iver Huitfeldt class considerably cheaper than comparable ships.

The frigates are compatible with the Royal Danish Navy's StanFlex modular mission payload system used in the Absalons, and are designed with slots for six modules. Each of the four StanFlex positions on the missile deck is able to accommodate either the Mark 141 8-cell Harpoon launcher module, or the 12-cell Mark 56 ESSM VLS. Peter Willemoes passed the British Flag Officer Sea Training test in 2015.

While the Absalon-class ships are primarily designed for command, support and ASW roles, with a large ro-ro deck, the three new Iver Huitfeldt-class frigates are equipped for an air defence role with Standard Missiles, and the potential to use Tomahawk cruise missiles, a first for the Royal Danish Navy.

The ships were constructed in blocks in Estonia and Lithuania. These blocks were then towed to the Odense Steel Shipyard, where they were assembled.

Most of the weapons for the three ships were reused from the previous Niels Juel-class corvettes and the Flyvefisken-class patrol vessels. Other components were reused as well to keep the cost at a minimum.

These ships share their anti-air warfare suite with the Royal Netherlands Navy's De Zeven Provinciën-class frigates and the German Navy's Sachsen-class frigates. The sensors of this suite include the long range surveillance radar SMART-L (passive electronically scanned array) and the multi-function radar APAR active electronically scanned array. The SMART-L and APAR are highly complementary, in the sense that SMART-L is an L band radar providing very long range surveillance while APAR is a I band radar providing precise target tracking, a highly capable horizon search capability, and missile guidance using the Interrupted Continuous Wave Illumination (ICWI) technique, thus allowing guidance of 32 semi-active radar homing missiles in flight simultaneously, including 16 in the terminal guidance phase. The primary anti-air weapons are the point defence Evolved Sea Sparrow missile and the area defence SM-2 IIIA. The Mk 41 Vertical Launch System is used to house and launch these missiles. Depending on the number of Harpoon launchers installed, up to 24 Evolved Sea Sparrow missiles and 32 SM-2 IIIA or SM-6 may be carried.