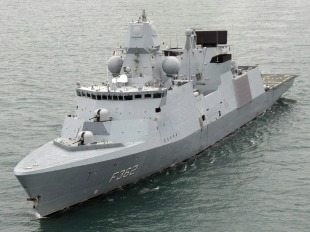 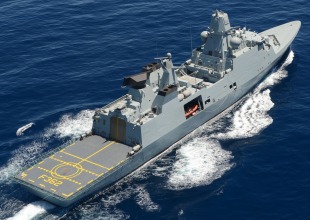 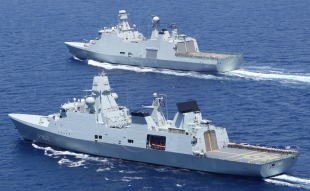 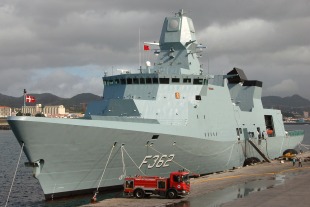 Namesake:
Peter Willemoes was a Danish naval officer. He fell in the Battle of Zealand Point
Operator:

The frigates are compatible with the Danish Navy's StanFlex modular mission payload system used in the Absalons, and are designed with slots for six modules. Each of the four stanflex positions on the missile deck is able to accommodate either the Mark 141 8-cell Harpoon launcher module, or the 12-cell Mark 56 ESSM VLS. The Peter Willemoes passed the British Flag Officer Sea Training test in 2015.

While the Absalon-class ships are primarily designed for command and support roles, with a large ro-ro deck, the three new Iver Huitfeldt-class frigates will be equipped for an air defence role with Standard Missiles, and the potential to use Tomahawk cruise missiles, a first for the Danish Navy.

On 18 February 2017, she came alongside USS George H.W. Bush as the aircraft carrier was replenishing with USNS Supply. Peter Willemoes transits the Gulf of Aden while on patrol on 24 April 2019.