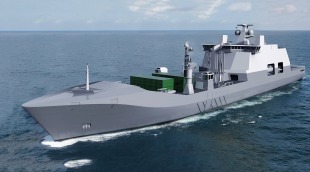 The Combat Support Ship is a new supply vessel for the Royal Netherlands Navy. The Combat Support Ship (CSS) should increase the effectiveness of naval vessels. The CSS will supply other naval vessels at sea with fuel, ammunition and goods. The tanker capacity 7700 m3 Diesel Fuel and 1000 m3 Aviation Fuel. It will be equipped with two replenishment at sea stations and feature a helicopter deck and hangar for flight operations. There is space for sea containers on the upper deck. For boarding and rescue operations and passenger transport, there are two RHIB motorboats on board.