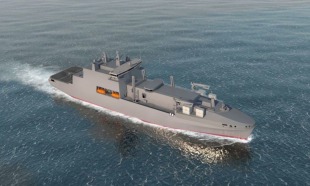 A Fleet Solid Support Ship is a type of Royal Fleet Auxiliary (RFA) ship designed to supply solids (otherwise known as dry stores), such as ammunition, explosives and food, to Royal Navy ships at sea. The term can also refer to the programme to replace the RFA's existing solid support ships, the Military Afloat Reach and Sustainability (MARS) Fleet Solid Support (FSS) programme.

With the introduction of the Queen Elizabeth-class aircraft carriers, a new class of solid support ship will be required to replace the existing ageing and incompatible Fort-class. The Strategic Defence and Security Review 2015 confirmed that three new large solid support ships would be acquired for the RFA as part of the Military Afloat Reach and Sustainability (MARS) Fleet Solid Support (FSS) programme.

In 2018, a contract notice was placed for two solid support ships, with a probable option of a third later. The ships required a total cargo capacity of up to 7,000 m3 (250,000 cu ft), the ability to travel at a sustained speed of 18 knots (33 km/h; 21 mph) without resupply, the capability of delivering non-bulk logistic material whilst underway at 12 knots and transfer single loads of up to 5 tonnes.

In July 2022, Rear-Admiral Paul Marshall, the Senior Responsible Officer for the Fleet Solid Support ship project, told the House of Commons Select Defence Committee that the first ship was envisaged for service entry in 2028 with the third entering service by 2032. In November 2022 it was announced that Team Resolute (BMT, Harland & Wolff and Navantia) had been selected to build the ships with the start of construction anticipated in 2025. Subject to meeting final approvals, the actual manufacturing contract was expected in the first quarter of 2023.

The Team Resolute design envisages a vessel about 216 meters in length with 3 replenishment-at-sea rigs and possessing about 9,000 square meters of cargo space. The ship hangars will have the capacity to support two Merlin helicopters as well as UAVs. Vessel speed is envisaged at 19 knots.