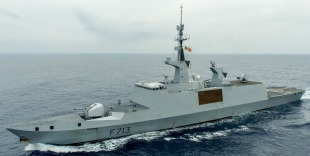 Aconit is a general purpose stealth frigate of the French Navy. Initially to be named Jauréguiberry, she is now the fourth French vessel named after the FNFL corvette Aconit. She took part in the action of 9 April 2009.

Based in Toulon, the frigate was reported active in the Mediterranean as of 2021, taking part in the MARE APERTO exercises with the Italian navy in October.

Aconit is scheduled to complete a life extension upgrade by 2023 and to remain in service until 2034.