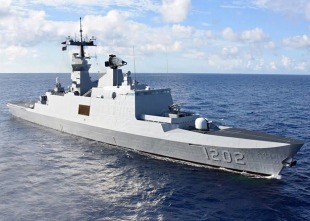 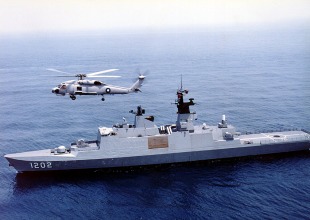 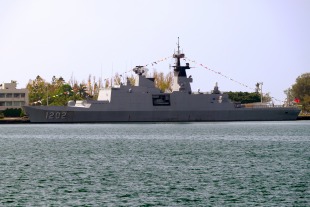 ROCS Kang Ding (PFG-1202) is a Kang Ding-class frigate of the Republic of China Navy.

The Kang Ding class was originally intended to be equipped with Aster-15 and Arabel 3D / X-band multi-functional radar. However, due to cost and political difficulties, the upgrade never materalised. However, since 2019 a limited upgrade program has begun. In 2020, ROCN signed a contract to upgrade the DAGIE decoy system to the DAGIE MK2, which will permit the deployment of more advanced decoys and chaff such as SEALEM (RF for distraction and seduction), SEALIR (IR for distraction and seduction) and REM rockets. It was also observed that the Oto Melara 76 mm/62 mk 75 gun was upgraded with a new cupola with angled surfaces for signature reduction. In 2022, a deeper upgrade of the Kang Ding was announced, with the progressive installation of Huayang VLS for the TC-2N missile and upgraded Xunlian command and control systems across the entire fleet by 2025.