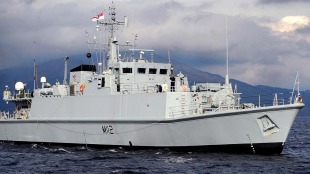 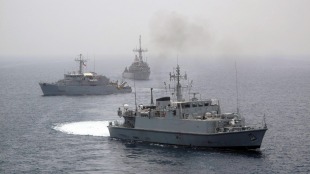 HMS Shoreham is a Sandown-class minehunter of the British Royal Navy. She is the fifth vessel to bear the name. Shoreham is now permanently based at HMS Jufair as part of 4 Minehunters of 9th Mine Countermeasures Squadron supported by a Royal Fleet Auxiliary Bay Class on Operation Kipion.

Shoreham was accepted into service on 28 November 2001 and commissioned in a ceremony in her namesake port on 20 July 2002. In 2012, Shoreham deployed to the Gulf to join the 9th Mine Countermeasures squadron based in Bahrain. She returned to Faslane on 28 August 2015 after three years away.

Shoreham entered refit in Rosyth in 2016 for repair work to her hull. Other work carried out included installing a new galley, fitting a new fire detection system and improving the high-pressure air system. She was handed back to the Royal Navy in January 2017. In spring 2017, Shoreham deployed with NATO Mine Countermeasures Group 1 (SNMCMG1), operating around Northern Europe. During the course of this deployment Shoreham, the last of the Sandown Class to be built exercised with the former HMS Sandown, the first, now operated by the Estonian Navy as Admiral Cowan.