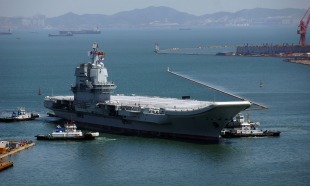 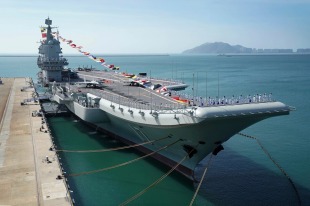 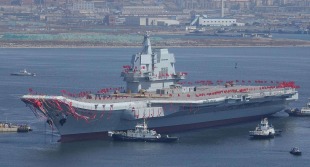 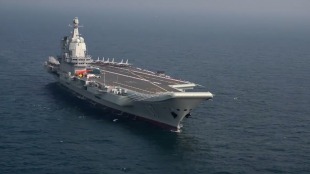 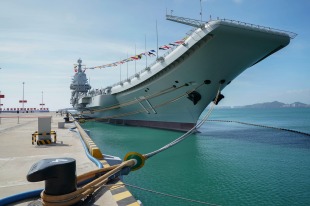 Shandong (17) is a first-generation Chinese aircraft carrier that was launched on 26 April 2017 for the People's Liberation Army Navy (PLAN) of the People's Republic of China (PRC). It is the country's second aircraft carrier after the completion of Liaoning, and the first built domestically. Shandong was initially designated as a Type 001A air carrier during development but was finalized as Type 002 at commissioning.

Shandong was constructed by the Dalian Shipbuilding Industry, part of the China Shipbuilding Industry Corporation, in Dalian, Liaoning province, China. According to the state media service Xinhua, manufacture began in November 2013 and laid down the keel for its hull in a drydock beginning in March 2015. The Chinese government did not publicly confirm the ship's existence until construction was well underway. Satellite imagery for the defense analysis industry showed the aircraft carrier in the early stages of hull assembly by March 2015. Public photos of a hull with military characteristics at the Dalian shipyard surfaced on the internet the next month. In October 2015, the first definitive signs of the vessel's role appeared when construction of a hangar deck began on the hull. In December 2015, a Chinese defense ministry spokesman confirmed that the ship was an aircraft carrier, stating that the design and construction work was under way. By the end of 2016, the ship was substantially structurally complete.

Following the launch, the carrier was fitted-out and underwent early tests of the propulsion system. The dockside system trials began after the out-fitting was completed in November 2017.

At the time of its launch, the ship was not expected to be delivered to PLAN until 2020; however, successful early tests put the project ahead of schedule and media reports indicated that it could enter the navy fleet in 2019. While its predecessor Liaoning has been used largely as a training ship since it entered active service in 2012, the Type 002 is expected to be used in regular military operational service.

The carrier was commissioned on 17 December 2019 at Sanya, Hainan by Central Military Commission chairman Xi Jinping and was officially named Shandong. After commissioning, Shandong would still need to reach Initial Operational Capability (IOC) or basic standards for deployment, which its predecessor Liaoning only attained six years after commissioning in 2018.

The aircraft carrier's design is largely based on China's first carrier Liaoning, which was itself built from the partially-complete hull of the Soviet Kuznetsov-class aircraft carrier Varyag. It retains the ski jump takeoff, which limits its air wing to helicopters and Shenyang J-15 fighter jets of the People’s Liberation Army Navy Air Force, and the ship is powered by conventional oil-fired boilers driving eight steam turbines derived from the Soviet-designed examples installed on Liaoning. It measures about 315 metres (1,033 ft) long, with a displacement of about 55,000 tonnes (70,000 loaded).

However, it carries modifications and upgrades compared to Liaoning. It has increased storage for ammunition and fuel, with a larger aircraft capacity of 44 aircraft, eight more than Liaoning.

Shandong has a broader flight deck but a shorter island superstructure than Liaoning to give more space for aircraft movements. The island also has redesigned radars and a new bridge, while the fleet command and flight control tower are on separate floors for more efficiency. It includes an active electronically scanned array (AESA) radar system.

Shandong, like its predecessor, uses the simpler «short take-off but arrested recovery» (STOBAR) launch and recovery system. Future carriers, such as the Type 003 aircraft carrier, are planned to use an Electromagnetic Aircraft Launch System (EMALS) that allows the launch of heavier and more advanced aircraft such as the Shenyang J-31 or the Chengdu J-20.