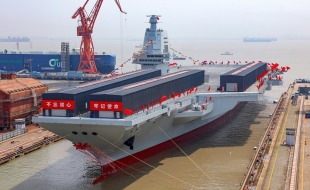 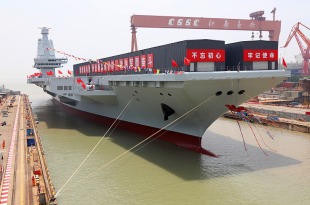 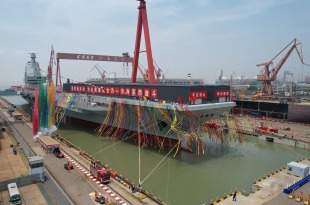 Fujian (18) or the Type 003 aircraft carrier is a second-generation Chinese aircraft carrier under outfitting for the People's Liberation Army Navy (PLAN) of China. It is named after Fujian province situated west of the 110-mile-wide Taiwan Strait. Launched on June 17, 2022, Fujian is China’s first aircraft carrier with an fully indigenous design, featuring a CATOBAR system and electromagnetic catapults.

The Type 003 class was originally unofficially called Type 002 when Shandong, China's then-incomplete second carrier, was believed to be designated Type 001A. Shandong's official designation, Type 002, was revealed during commissioning. Observers hence believed the third carrier will be Type 003.

The Type 003 is expected to use integrated electric propulsion (IEP) and electromagnetic catapults, whereas preceding Chinese carriers were conventionally powered and launched aircraft with ski jumps.

The carrier's size is expected to be between the unfinished 85,000-ton Soviet aircraft carrier Ulyanovsk and the United States Navy's 100,000-ton supercarriers. Early assessment measured the Type 003 at approximately 300 meters (984 ft 3 in) long, roughly the length of the US Navy's Gerald R. Ford-class ships. Renewed assessment indicated that its length was 316 meters and has a flight deck with a width of 76 meters. Comparisons have also been drawn to the American Kitty Hawk-class aircraft carriers. Earlier press reports and Chinese media generally suggested that the ship might have a displacement of around 80,000 tons to 85,000 tons. Later assessment backed by satellite images suggested the displacement was underestimated, and the Type 003 carrier might be closer in displacement to about 100,000 tons. Analyst Robert Farley believes the Type 003 will be the «largest and most advanced aircraft carrier ever built outside the United States» when completed.

In 2018, Kyle Mizokami predicted the carrier would operate an air group of 40 fighter aircraft, plus propeller-powered transport and airborne early warning and control aircraft.

The Type 003 was originally intended to use steam-powered catapults. In 2013, PLAN Rear Admiral Yin Zhuo said that China's next aircraft carrier would be equipped with an electromagnetic launch system. Multiple prototypes were spotted by media in 2012, and aircraft capable of using the system were tested at naval research facilities. The change to electromagnetic (EM) catapults likely explains the increase in size from previous Chinese carriers.

Construction began in the mid-2010s. The exact date is not known; The National Interest reported March 2015; The Diplomat reported that «initial work» had begun in February 2016, followed by a notice to proceed given to the Shanghai Jiangnan Shipyard Group in March 2017. Works were reportedly delayed in June 2017 by electromagnetic and steam catapults tests. By November 2017, the Navy had reportedly developed an IEP system—in lieu of nuclear power—to power electromagnetic catapults, allowing work on the Type 003 to resume.

The block modules were moved from the manufacturing facility to the staging area in May 2020, and into dry dock in July 2020. Almost all of the keel and base hull blocks were in the dock by early September 2020; the foremost part of the bow was missing. Measurements based on satellite and aerial photography suggested a hull/waterline length of 300 meters — nearly the flight deck length of China's existing carriers — a maximum beam of 40 meters (131 ft 3 in), and a displacement of more than 85,000 tonnes (84,000 long tons). In mid-2020, anonymous Chinese sources projected a launch in the first half of 2022. In September 2020, Rick Joe of The Diplomat projected a launch in mid-2022 at the earliest.

In July 2021, satellite pictures showed that construction was moving ahead, with key elements such as the superstructure and three catapult launch systems being added to the hull. On 10 November, Bloomberg reported that «China is three to six months away from launching its third aircraft carrier», citing a report by the Center for Strategic and International Studies.

The aircraft carrier was launched on 17 June 2022. The vessel, named Fujian, was launched with the hull number 18. Its name received scrutiny in western media as its namesake Fujian province is located opposite of the self-governing, but Chinese claimed island of Taiwan.