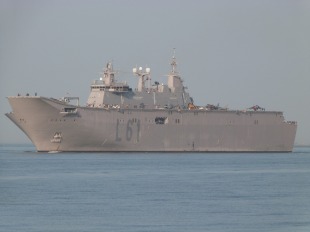 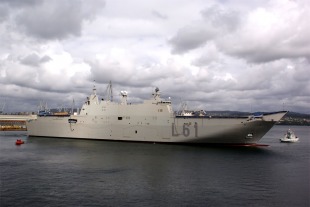 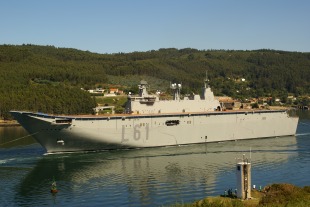 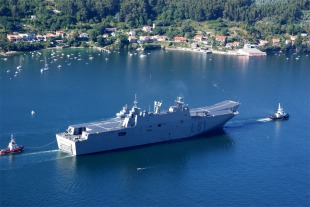 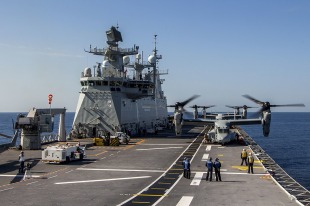 Juan Carlos I is a light multi-purpose aircraft carrier and a universal landing craft. The ship is capable of carrying up to 30 aircraft McDonnell Douglas AV-8B Harrier II fighter jets, Boeing CH-47 Chinook helicopters, NH and NH-90 or Sikorsky S-61 Sea King and a landing party numbering to the battalion.

The project «buque de proyección estratégica» (Strategic Projection Vessel), which he received at the design stage, was approved in September 2003. Construction began in May 2005. The launch took place on 22 September 2009, and on 30 September the ship was put into operation. The construction cost 462 million euros.

Juan Carlos I has a flight deck 202 m long with a springboard in the bow. There are eight seats on the deck for McDonnell Douglas AV-8B Harrier II or medium-sized helicopters NH and NH-90 and Sikorsky S-61 Sea King, four seats for heavy transport helicopters Boeing CH-47 Chinook and one for the Bell Boeing V-22 Osprey tiltrotor aircraft. The aircraft carrier can carry either 30 helicopters or 10-12 AV-8B Harrier II and 10-12 helicopters.

The multi-purpose garage and hangar on two decks have a total area of 6,000 sq.m; up to 6,000 tons of cargo can be accommodated on each deck. At the stern there is room for four LCM-1E landing craft or for one LCAC hovercraft and several AAV-P7 assault amphibious vehicles.