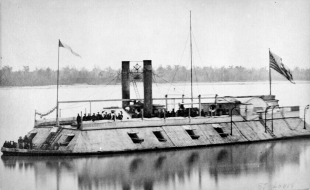 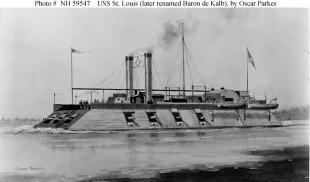 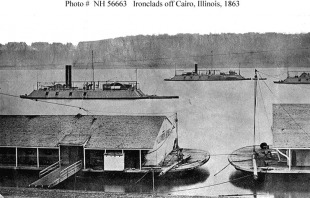 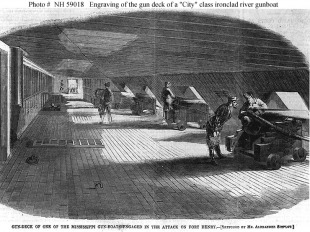 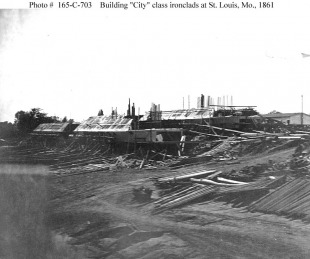 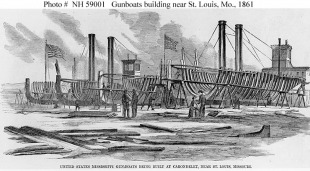 USS Baron DeKalb (1861) was a City-class ironclad gunboat constructed for the Union Navy by James B. Eads during the American Civil War.

USS Baron DeKalb, named after General Baron DeKalb of Hüttendorf near Erlangen, in present-day Bavaria, was originally named Saint Louis, and was one of seven City-class ironclads built at Carondelet, Missouri and Mound City, Illinois, for the Western Gunboat Flotilla.

These ironclads were shallow draft with a center driven paddle wheel. They were partially armored and slow and very hard to steer in the currents of rivers. This ironclad was also vulnerable to plunging fire and also by hits in their un-armored areas. Called «Pook Turtles» for the designer, they did yeoman service through four years of war and were present at almost every battle on the Mississippi River and its tributaries.

During 1862 St. Louis, under the command of Lieutenant L. Paulding USN, was attached to Rear Admiral Andrew Hull Foote's squadron and participated in the Battle of Lucas Bend and the capture of Fort Henry on the Tennessee River (February 6, 1862). She served as flagship for the squadron when it assisted the Union Army at the capture of Fort Donelson on the Cumberland River (February 14–16, 1862). Between April and June 1862, she operated against Fort Pillow, Tennessee.

St. Louis was renamed Baron De Kalb September 8, 1862. This change was apparently in anticipation of the vessel's transfer from the War Department to the Navy Department, there already being a St. Louis in commission with the Navy.

Reassigned to the Union Navy

On October 1, 1862 Baron De Kalb was transferred to the Navy Department. During December 21–28 she took part in the Yazoo Expedition and participated in the action at Drumgould's Bluff (December 28). Four of Baron De Kalb's sailors were awarded the Medal of Honor for their actions in the expedition: Ordinary Seaman Peter Cotton, Captain of the Forecastle Pierre Leon, Boatswain's Mate John McDonald, and Boatswain's Mate Charles Robinson.

On July 13, 1863 Baron De Kalb was sunk by a mine (then called a «torpedo») in the Yazoo River, one mile below Yazoo City, Mississippi.